Pfizer’s CEO Hank McKinnell — soon to retire — has lost no time finding another gig: that of male model for pharmaceutical vendor ads. Some golden parachute!

The latest sighting of McKinnell was an ad in the August 2006 issue of Medical Marketing & Media, shown below. 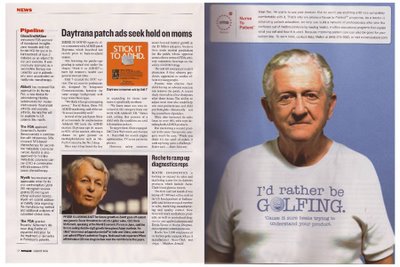 McKinnell is seen on the right. WAIT A MINUTE! He’s also seen on the left! Those guys at MM&M! The ad people have clambered over the Chinese Wall again and juxtaposed advertising and editorial content obviously to embarrass Hank.

You may recall a similar juxtaposition incident I reported on in April when MM&M juxtaposed the article “Clash of Civilizations” by Harry Sweeney, who spoke of “wooly-headed thinking”, next to an ad showing a wooly-headed 60’s Hippie (see ” Clash!“).

Regarding the first “coincidental” juxtaposition, Matthew Arnold, MM&M’s Senior Editor, said: “We at MM&M were as amused as you were at the juxtaposition (which we only noticed on visiting your site), though I can assure you, it was completely coincidental, right down to the colors. We editorial types don’t even look at the ads. We’re that pious. Well, okay, actually just that busy.”

Matt, out of professional courtesy, I for one buy your story (I also buy your mag. Can I be comped?)

In the ad, McKinnell (who goes by the name “Ted” in the ad) is wearing a T-shirt that says “I’d rather be GOLFING. ‘Cause it sure beats trying to understand your product.” “Ted,” says the ad, “wants to use your product. But he won’t do anything until he’s completely comfortable with it.” The ad proposes patient education as a solution.

In the editorial, Hank is “looking east for future growth as Zoloft goes off-patent.” I guess with the naming of Kindler as new CEO, Pfizer is scrapping that idea and focusing more on combating counterfeiting in Asia than selling more legitimate product there (see ” Kindler Fox in Pfizer Henhouse (aka Bunker)“).

BTW, it seems that male model careers are common among former Pfizer executives. Peter Rost — Pharma’s Black Knight and former Pfizer VP — claims he paid for his medical education by modeling men’s underwear (see his blog where there is a lot more inside information about Hank McKinnel).