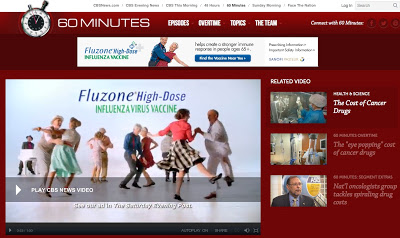 Here’s something you don’t see every day: a Sixty Minutes report that slams the extraordinarily high prices charged for cancer drugs — e.g., $100,000 per patient per year — sponsored by a pharmaceutical company (Sanofi), which markets at least one high-priced cancer drug (Zaltrap) that has been deemed not more effective than a cheaper drug on the market (see here). The ad, however, is for Fluzone High-Dose and is focused on older folk — don’t get started on that (see “Does the Flu Vaccine Work? What 62% “Effective” Really Means“)!

Here’s what the video ad, which interrupts the news segment, looks like on the Sixty Minutes site, which also includes a banner ad for the vaccine. You can view the video here.

The interesting point is that the oncologist interviewed by Sixty Minutes — Dr. Leonard Saltz, chief of gastrointestinal oncology at Memorial Sloan Kettering and a leading expert on colon cancer — “compared the clinical trial results of [Sanofi’s] Zaltrap to those of another drug already on the market, Avastin. He says both target the same patient population, work essentially in the same way. And, when given as part of chemotherapy, deliver the identical result: extending median survival by 1.4 months, or 42 days.” The cost of Zaltrap, according to Saltz, is $11,000 per month, more than twice that of Avastin and may have “little more toxicity.”

Saltz described the situation this way: “We’re in a situation where a cancer diagnosis is one of the leading causes of personal bankruptcy. We’re starting to see the term ‘financial toxicity’ being used in the literature.”

What was PhRMA’s response to this? Their response piqued my interest as I am sure it will yours.

“The pharmaceutical industry, which only provided canned statements and badly thought-out explanation via the president of its lobbying group, came off looking callous and insensitive,” said Matthew Herper over at Forbes (here).

Before I get to that, let’s look at some other factoids revealed by Sixty Minutes:

One reason drug prices are so expensive, noted Sixty Minutes, is that “according to an independent study, the single biggest source of income for private practice oncologists is the commission they make from cancer drugs. They’re the ones who buy them wholesale from the pharmaceutical companies, and sell them retail to their patients. The mark-up for Medicare patients is guaranteed by law: the average in the case of Zaltrap was 6 percent.”

After Saltz wrote a New York Times editorial on this, Sanofi cut the price of Zaltrap by more than half. Dr. Peter Bach, Sloan Kettering’s in-house expert on cancer drug prices, and co-author of the editorial said: “It was a shocking event. Because it was irrefutable evidence that the price was a fiction. All of those arguments that we’ve heard for decades, ‘We have to charge the price we charge. We have to recoup our money. We’re good for society. Trust us. We’ll set the right price.’ One op-ed in the New York Times from one hospital and they said, ‘Oh, okay, we’ll charge a different price.’ It was like we were in a Turkish bazaar [where you can barter for better prices].”

So what was the response from PhRMA? Let me just quote the transcript for you:

John Castellani: The drug companies have to put a price on a medicine that reflects the cost of developing them, which is very expensive and takes a long period of time, and the value that it can provide.

John Castellani is president and CEO of PhRMA, the drug industry’s trade and lobbying group in Washington.

Lesley Stahl: If you are taking a drug that’s no better than another drug already on the market and charging twice as much, and everybody thought the original drug was too much…

John Castellani: We don’t set the prices on what the patient pays. What a patient pays is determined by his or her insurance.

Lesley Stahl: Are you saying that the pharmaceutical company’s not to blame for how much the patient is paying? You’re saying it’s the insurance company?

Herper makes some interesting points that you should read in context of his article:

“[D]rug companies like to act as if patients aren’t really the ones who pay [see PhRMA’s argument above]. Medicare pays, insurers pay, but patients are sheltered from these high costs by an arrangement of drug giveaways and charities.” Herper relates a patient story, which illustrates how misleading this argument is:

In closing, Herper says: “It might be time for drug industry executives to think out loud about how to decide what will limit cancer drug costs, and when costs should be high — before someone else does that thinking for them. With Merck, AstraZeneca, and Roche all making high-priced, high-value cancer drugs central to their business plans, this is a major issue.”