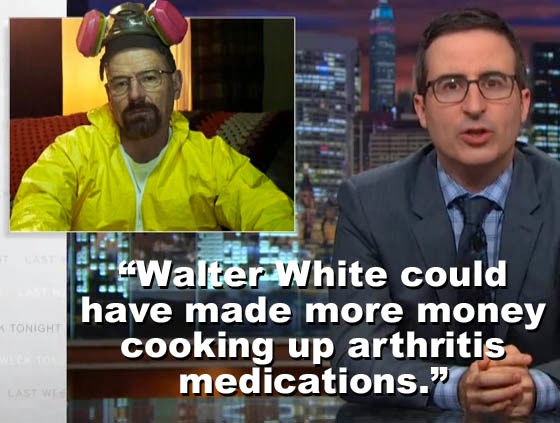 Last Week Tonight with John Oliver is back on HBO and the pharmaceutical industry was the centerpiece of last night’s show in which Oliver spent more than 17 minutes educating the audience on the industry’s marketing practices.

Oliver began by citing some statistics such as annual sales of Rx drugs in America amount to over $1,000 per person. “Walter White could have made more money cooking up arthritis medications,” quipped Oliver.

Oliver focuses mostly on physician marketing and pharma sales reps. He begins by showing segments from direct-to-consumer (DTC) ads, all of which end with the phrase “ask your doctor,” which of course is often the butt of jokes (see, for example, here).

“Oliver says Big Pharma wants you to talk to your doctor,” says Time, “because they have spent billions of dollars marketing their drugs to physicians. Oliver’s research revealed that pharmaceutical companies spent $24 billion marketing directly to doctors last year. According to one study quoted by Oliver, 9 out of 10 top drugmakers spent more on marketing drugs than researching the drugs. In Oliver’s words, ‘Drug companies are like high school boyfriends: they are more interested in getting inside you than in being effective once they are there.'”

I’ve written about many of the issues that Oliver speaks about in his segment and I will provide the back stories below. There was one thing in this segment, however, that stood out for me. It was a claim made by a GSK executive in a 2001 Advair launch video that the Department of Justice uploaded to its website as part of a whistleblower suit.

In that video (which is included in Oliver’s segment; see the end of this post), the GSK executive claimed: “There are people in this room who are going to make an ungodly sum of money selling Advair.” To which Oliver said: “Ungodly! That would barely be an appropriate tone if they ere trying to get cereal into people’s bodies let alone drugs.” Which is an interesting analogy because many pharma marketing people have come from the ranks of the consumer goods industry (e.g., cereal manufacturers).

Of course, that’s just something to motivate the reps in the audience. We all know that the only pharma sales reps making an “ungodly amount of money” are whistleblowers (see here) and John Oliver cites testimony from several of these (former) sales reps.