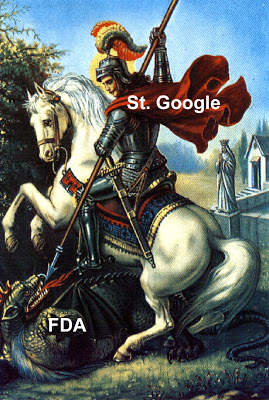 There once was a dragon — called FDA — much feared by the citizens of the tiny pharma e-marketing community.

The dragon usually made its nest in TV or print land, but it soon devoured all the denizens of those places and decided to build its nest in Internet land where many pharma e-marketing citizens were wont to do business.

Soon the dragon lashed out and prevented the good pharma e-marketing citizens from doing business as usual in the search engine district of their village. The citizens tried to placate the dragon with user fees, to no avail.

All feared that the dragon, if allowed to get his way, would ruin all business, everywhere in Internet land.

Then there appears Saint Google on his travels. The citizens beseech St. Google to help them rid their land of the dragon.

“I cannot allow this beast to ruin business in the search engine district or anywhere else that I hold sway in Internet land!,” he cried.

St. Google then faced the dragon, and protecting himself with the sign of the “one-click rule,” slays it — or at least thwarts its plans to prevent the pharma e-marketers from doing business in the search engine district — by declaring “redirect” URLs OK in pharma marketing adwords!

From then on, all the pharma e-marketing citizens felt safe and were able to place their adwords all over Internet land!

——–
This story is based on the rumor swirling in Twitterville that Google has created an official exception for paid search for Pharma and URL redirects. See The Next FDA Concern May be the Use of “Redirect” URLs and follow me and see the reaction to this on Twitter…

It appears that Google has granted pharma this exception AND has been doing so for a number of years:

“We just heard back from Google this morning,” said Jeff Hill of MedThink Communications. “Their ‘policy board’ ruled that they will make an exception just for pharmaceutical companies and allow non-branded URLs in paid search ads to be redirected to branded websites.”

“For years it has been standard practice for Google to make this exception for our pharmaceutical clients,” said Eileen O’Brien of Compass Healthcare Communications.

This raises more questions than it answers:

Was Google making exceptions on a case-by-case basis up ’til now, but now is making the exception the rule for ALL pharma?

If some pharma companies were already taking advantage of the exception, why didn’t the 14 companies cited last week by the FDA do it? It’s hard to imagine that not a single one of these companies would NOT have known about the exception to the rule than O’Brien claims was going on for years?

If the 14 companies KNEW that Google would give them an EXCEPTION, then what was their motive in using the brand name in the adwords if they could have used a redirect URL instead? Did they knowingly use the “one-click” rule — which everyone knew was not a rule at all — as an excuse to get an extra bonus by linking the brand name to the benefit WITHOUT including the risks?

Did the FDA know that pharmaceutical companies had the option of using redirect URLs in their ads? If so, the FDA may have said to itself, “These guys could have easily used a redirect URL but they decided to use the brandname URL instead. Let’s show them that we are not dummies and quash this practice right now!”