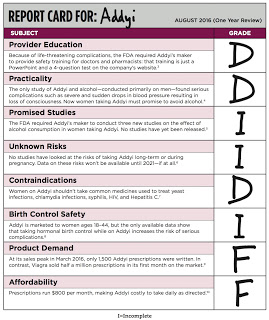 “Fool me once, shame on you; fool me twice, shame on me,” should be FDA’s response to a report card released by the National Women’s Health Network advocacy group and shown here.

FDA was first “fooled” into approving Addyi based on a dicey self-assessment questionnaire, which formed the basis for the drug’s efficacy in clinical trials (read “The #Pharma-Developed Self-Assessment Questionnaire that Got Addyi Approved“) and by “patient advocate” testimony (read “The Power of Patient Input: How FDA Learned to Love & Approve Addyi“) sponsored by Sprout, the company that brought Addyi before the FDA and which was bought by Valeant after the drug was approved.

Finally, Sprout’s “Even the Score” campaign claimed that there was sexism inherent in the number of FDA-approved treatments for sexual disorders (read “Flibanserin (Addyi): The Title IX of Drugs or the Pill for No ill?“).

Will the FDA be fooled again by “crooked” Valeant, whose business and accounting practices are under criminal investigation by U.S. prosecutors (see here)? Evidence from the Report Card says “Yes!”

According to the Report Card, regarding Provider Education:

“To balance grave safety concerns, the FDA required the makers of Addyi to create a Risk Evaluation and Mitigation Strategy, or REMS. The REMS requires that prescribers and pharmacies be certified by enrolling and completing training about the increased risk of severe side effects and the importance of not drinking alcohol during treatment with Addyi. One year later, however, the certification training for clinicians and pharmacies is just a PowerPoint and a 4-question test on the company’s website [my emphasis].”

Actually, it’s NOT funny! It makes a joke of FDA’s Addyi REM requirements (find them here).

Valeant also got a D grade for Practicality:

“The FDA asked Addyi’s maker to conduct a safety study assessing the risk associated with alcohol consumption, but only 2 of the 25 participants in the alcohol safety study were women.” Regarding that, you might be interested in reading this: “Addyi + Alcohol = 1 Death So Far. FDA Not Concerned.“

It seems that although the FDA can be fooled at least once and perhaps two times by the pharma sponsors of Addyi, physicians and women are not so gullible. According to the Addyi Report Card regarding Product Demand:

“One year later, Addyi’s market performance has been underwhelming, perhaps due to its high risks and low benefit. At its sales peak in March 2016, it is estimated that only 1,500 Addyi prescriptions were written. In contrast, Viagra sold half a million prescriptions in its first month on the market. Current estimates put the number of Addyi prescriptions at 1,000 in May 2016, suggesting that interest in the drug is falling among consumers.”