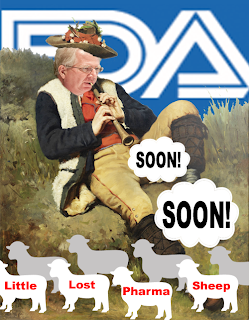 The pharma social media hopefuls & pundits & consultants came running up the Hill to visit the Director man to drive all doubt away. But when they arrived at the Hill, they found no guidance. The Director man laughed at the sight of their angry faces.

“Don’t cry ‘soon,’ Director man,” said the pundits et al, “when there’s no guidance coming!” They went grumbling back down the Hill.

Later, the Director man sang out again, this time to Pharmalot, “Soon! Soon! The social media guidance is coming … soon!” To his naughty delight, he watched the pharma social media hopefuls & pundits & consultants run up the Hill to ask him to drive all doubt away.

When the pharma social media hopefuls et al saw no looming guidance they sternly said, “Save your hopeful song for when there is really some guidance coming along! Don’t cry ‘soon’ when there is NO soon!”

But the Director man just grinned and watched them go grumbling down the Hill once more.

Later, he saw some REAL social media guidance being developed by his OPDP flock. Overjoyed, he leaped to his feet and sang out as loudly as he could, “Guidance! Guidance!”

But the pharma social media consultants et al thought he was trying to fool them again, and so they didn’t pay him any attention.

At sunset, everyone wondered why the Director man hadn’t returned to the FDA with his OPDP flock. They went up the Hill to find the Director man. They found him weeping.

“There really was guidance here! The OPDP flock has scattered! I cried out, ‘Guidance!’ Why didn’t you come?”

An old wise Pharmaguy tried to comfort the Director man as they walked back to the FDA.

“I’ll help you look for your lost OPDP flock and the guidance they wrote in the morning,” he said, putting his arm around the Director man, “Nobody believes a liar…even when he is telling the truth!”