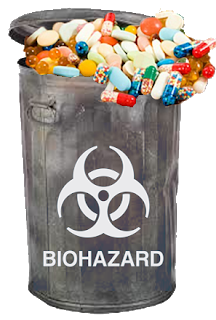 “For the second time,” reports Pharmalot (here), “the pharmaceutical industry is challenging a local government over an ordinance that requires drugmakers to cover the cost of a prescription drug ‘take back,’ or disposal program.

“This time, the trade groups representing brand-name drugmakers, biotechs, generic drugmakers and over-the-counter purveyors have filed a lawsuit against the King County Board of Health in Washington.”

So, what does the drug industry recommend we do with our unused and out-of-date pills?

PhRMA is promoting a “free, easy and safe method of home disposal of unused and expired medication.” So, what exactly is their “safe” method of disposal?

Through its “SMARxT Disposal Program,” PhRMA is “educating” consumers and urging them to discard unused pills with “normal household trash” and let Waste Management or some other trash disposal company dispose of it in landfills or wherever.

“Disposing of unwanted pharmaceuticals in household trash … minimizes the potential that unwanted medicines would be stolen, diverted or improperly used,” claim the drug company plaintiffs in the case. “Collection kiosks, bins and other handling facilities used in take-back programs can become a target for thieves and others who might wish to steal unwanted medicines for improper or illegal purposes. The costs of providing around-the-clock security for collection sites and sorting and processing facilities will be significant and, regardless of the precautions taken, some level of theft, diversion and improper use will inevitably occur. The disposal of unwanted medicines in household waste eliminates the problem of ‘reconcentration’ and reduces the likelihood of theft, diversion and improper use.”

Meanwhile, there is evidence that improper household disposal of drugs can cause environmental damage. Traces of human medicines could be damaging the ecology of streams and rivers, according to a Swedish study” (see “Fish Psyched Out on Drugs!“).

Of course, PhRMA recommends a “surefire” method of household disposal that is “safe” and “a prescription for a health planet.” PhRMA recommends unwanted medicines be “removed from containers, placed in a sealed plastic bag or container and discarded with normal household trash. To the extent that children or pets are present in the household [???], consumers may wish to mix coffee grounds, cat litter, or other unpalatable home waste in with the unused medicines before sealing the mixture in a plastic bag and discarding it with normal household waste.”

If the drug industry stopped illegally promoting drugs for unapproved uses and spent as much time and effort on improving medication adherence as it spends on these court cases and waste disposal educational programs, the problem of unused drugs might be solved without the need for “SMARxT” or non-“SMARxT” disposal plans.

To the extent that the industry is opposing these municipal disposal plans for economic reasons, it may wish to reconsider a stance that just doesn’t look good from a PR perspective, especially when the 11 largest pharmaceutical companies reported $85 billion in profits last year, according to publicly available reports.

If the industry took responsibility for what happens to their products after the sale is made — as recommended by Seattle City council member and county Board of Health vice chair Richard Conlin — the industry would win very big in the public reputation department. According to a recent PatientView global survey of patient groups, the overall reputation of pharma declined in 2012. Only 34% of the 600 patient groups responding to the 2012 survey state that multinational pharma companies had an Excellent or Good reputation during 2012. The equivalent figure from the 500 patient groups responding to the 2011 survey was 42% (see here).