I read — with sadness, I must admit — that the offices of Berkeley Premium Nutraceuticals, the company that brought us Enzyte, the “natural male enhancement pill,” was raided by no less than four federal agencies in March. The agencies were the U.S. Postal Service, the FBI, FDA and the IRS. A pretty damn intimidating lot, I’d say! (See “Feds Raid Herbal Supplement Company“).

“We received information that there could be evidence of criminal activity in the location, and for that reason we’re executing a search warrant,” said FBI Special Agent Michael Brooks. So far there are no charges, no arrests and no indictments, just an ongoing investigation.

You’ve probably seen the ads for Enzyte on TV, which features a nerdy guy named “Bob.” From the very beginning, the Enzyte ads were a take-off on the Viagra “Bob” ads, which featured a non-nerdy guy with a smile on his face and women (men too!) that looked upon him with reverence or slightly wicked smiles. Recently, Viagra brought Bob back in the “He’s back” series of ads in which devil’s horns — arising from the Viagra logo — pop out the guy’s head as he pushes his compliant wife into a negligee store.

The parallels between these products, how they are marketed, and how they have been or not been regulated is very interesting. We can start by looking at the two “Bobs” shown below. 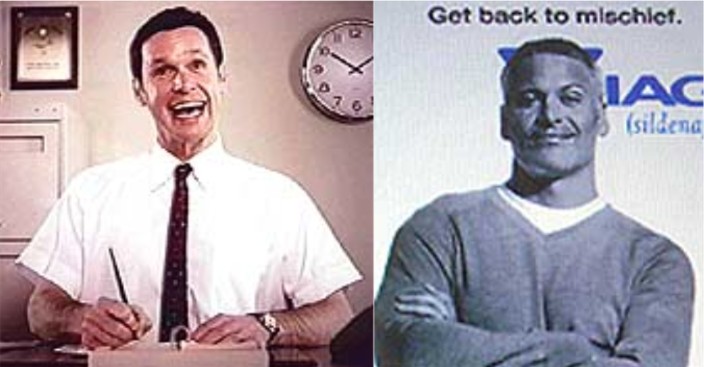 You can probably guess which is which, so I don’t bother to label the images.

I don’t know which Bob I relate to more. The nerdy Bob seems to be having fun with his friends. The other Bob is all involved with his wifey, but is pretty macho. Whatever. In any case, neither appear old enough to suffer from erectile dysfunction. I’ve made this point before about inappropriate targeting of ED drug ads (see “ED Drug Sales Limp“). At least Enzyte doesn’t claim to treat ED, it just enhances. Yeah, baby.

Pharmaceutical advertising professionals seem to like the Viagra guy ads, but disparage the Enzyte guy ads.

Regarding the Viagra ads, this is what Kelly Simmons, executive vice president and chief creative officer at Tierney Communications in Philadelphia, who studies sex issues in marketing, had to say: “I like the new tone; I think it’s playful.” (As reported in the New York Times, “Viagra, With a Wink and a Nudge, Joins Its Racier Rivals on Their Turf,” August 17, 2004; see also “New Viagra Campaign to Go Naughty“).

Indeed. Personally, however, I think the Enzyte Bob is more playful. However, Patrick Clinton, Editor-in-Chief (I love that title!) over at Pharmaceutical Executive Magazine, finds a “Problem With Bob” – the Enzyte Bob, not the Viagra Bob.

In a recent editorial, Patrick said that “we can always hope” that the Enzyte ad campaign will be shut down as well as the offices of Berkeley Premium Nutraceuticals. He goes on to say “It’s a nasty, leering piece of work, and all the worse because it tarnishes the already less-than-sterling reputation of drug advertising.” (See “The Problem With Bob,” Pharmaceutical Executive, April 2004).

Talk about the pot calling the kettle you-know-what! This is a good example of how the industry blames everyone but themselves for their problems. I mean how long can they expect to use that tactic and get away with it?

Who’s undermining Pharmaceutical Trust?
Patrick also says that the Enzyte ads “exploit the trust that pharmaceutical companies have earned and then undermine it.” Patrick, Patrick, Patrick. A better example, I would think, about squandering public trust could be taken directly from the pharmaceutical play book: namely, Merck continuing to run Vioxx DTC ads while upper management knew of SERIOUS problems — like death — attributable to Vioxx (see “Who Should Pay for Merck’s Obstructionism?” and “Vioxx Redux“).

I don’t seem to recall editorials about “undermining pharmaceutical trust” when the Vioxx story broke. If I am wrong, why don’t you tell me about it.

Younger Physicians Less Engaged in Social Media Than Their Elders