Just when you thought it was safe to go back into the water, Merck suggests that it may put Vioxx back on the market, according to an article in today’s Wall Street Journal (“Merck May Return Vioxx to Market“).

A reversal of the Vioxx withdrawal would be “a shocking turn of events.” So, why is Merck considering doing it?

The article lists several reasons, but none really have to do with serving the interests of their customers (patients and physicians). It’s really a matter of “strategy”: Merck could benefit in its court battles by arguing that Vioxx is a benefit to some patients; the additional revenue could help boost its finances (e.g., pay for court awarded damages); it would also help its case in getting a similar drug, Arcoxia, approved for sale in the U.S.

As more and more evidence piles up that all cox-2 inhibitors, including Vioxx and Celebrex, may cause increased cardiovascular events, isn’t an odd time to suggest the return of Vioxx? Apparently not. That’s just the risk side of the issue. You have to look at the benefit side.

“If the advisory committee and the FDA conclude that the benefits of this class outweigh the risks in some patient populations,” said Merck research head Peter S. Kim, “then we would have to consider the implications of these new data given the unique benefits Vioxx offers.”

In other words, if Celebrex is allowed to stay on the market — because its benefits outweigh the risks to some patients — then Vioxx should be allowed to come back. OK, I’ll buy that argument. It’s a valid point from Merck’s perspective.

If Vioxx does come back on the market, Merck should consider renaming it Reduxx.

But does returning Vioxx — or whatever it’s called — to market make sense from a patient perspective?

Mothra AND Godzilla?
It’s like the citizens of Tokyo dealing with Godzilla and Mothra in their midst. Many citizens always argued that one monster was enough, why do we need two of them? They began focusing on Mothra and listing all her bad traits that were harmful to citizens. Mothra, always seeing herself as the friend and savior of Tokyo, decided to leave town and vowed never to return for the good of the citizens. She also felt a bit guilty, recalling many instances in which she inadvertently crushed a few citizens with her wings while fighting Godzilla. .

Meanwhile, Godzilla absolutely refused to leave town. He was powerful and he claimed that there was not enough evidence that his bad traits harmed anyone. At least no one wanted to be first and come forward with accusations.

Eventually, however, the citizens of Tokyo accumulated enough evidence that all monsters, including Godzilla, were bad for some people – especially those that invited them to dinner or hung around with them long enough. Realizing her opportunity, Mothra argued that given this new evidence, she should be allowed back in town if Godzilla was allowed to stay. Is it in the best interest of the citizens of Tokyo to allow Mothra to return?

Tune in next week.

Meanwhile, how are painkillers remaining on the market doing? The following chart, from my friends at ImpactRx, shows the share of New Treatment Starts (NWRx + New Sample Only), which includes prescriptions and sample only for newly diagnosed patients and previously diagnosed patients with a change in medication. 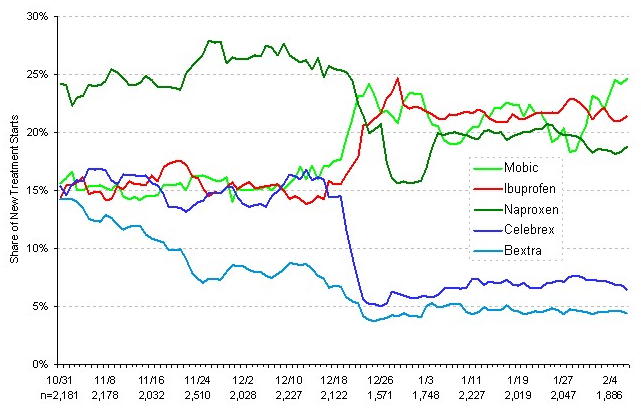 The period covers from the end of October, 2004 to the first week in February, 2005. Note that Celebrex and Bextra have a very low share of NRx. Of course, Vioxx is not shown because it is off the market during this period.

It appears that doctors are voting with their prescription pads and prescribing non-Cox-2 painkillers like Mobic, ibuprofen, and naprozen. Note in particular the success of Mobic because its glory days may be over.

“David J. Graham, a veteran Food and Drug Administration safety officer and recent whistle-blower, told a conference reviewing the risks of arthritis painkillers yesterday that Mobic, the medication that hundreds of thousands turned to after Vioxx and other COX-2 inhibitors came under a cloud, is potentially just as dangerous.

“Graham said a large new study he and a colleague had just completed, which FDA officials initially did not want him to present because it was preliminary, indicates that the anti-inflammatory drug is a ‘bad actor.’ His agency, he added, needs to ‘weed the garden of bad actors.’ “

Or, as the good citizens of Tokyo might say, All Monsters Must Die!