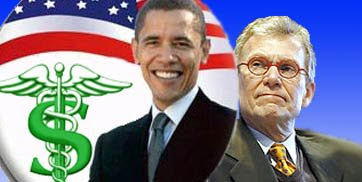 As reported in the Washington Post, President-elect Obama is asking the nation for input on health care reform (see “Obama Asks Nation for Input On Reforming Health System“).

“As he gears up for major health reform legislation next year, Obama is encouraging average Americans to host informal gatherings to brainstorm about how to improve the U.S. system,” reports the Washington Post.

Former senator Thomas A. Daschle, selected by President-elect Barack Obama to be health and human services secretary, will attend at least one “Health Care Community Discussion” and report back to his boss.

To make it easier for Daschle to “attend” at least one such session, and in keeping with Obama’s masterful use of Internet grass root campaigning, I have started a “virtual brainstorming session” online at the NEW Health Care Community Discussion Forum.

Although the pharma industry may be one of those “powerful special interests that have quashed previous health-care reform efforts,” I believe readers of this blog and Pharma Marketing News — who overwhelming support the pharmaceutical industry, yet favored Obama over McCain 55% to 29% — deserve to have their voices heard by Daschle and Obama even though the new administration may wish to circumvent special interest groups.

What I’ve learned over the years writing this blog is that we are not PhRMA and many of us wish to improve our country even if it means that the pharmaceutical industry will be faced with new challenges. In my view, BTW, having more people covered by health care insurance and focusing on outcomes will be a net benefit to the drug industry, which needs impetus to be more innovative and provide products that have clear benefits. Indeed, the drug industry needs to learn a lesson from Detroit: innovate, provide real value, or die! Or some day you’ll see pharma CEOs visiting Congress with their hats in hand, begging — just remember to leave the corporate jets and helicopters at home!

I’ve started the discussion going with the following post to the Health Care Community Discussion Forum:

Extend Health Care Insurance for Children Up to Age 25

The one most pressing issue for me — and I am sure many other parents today — is health care insurance coverage for their children over the age of 18 when most insurance policies of the parents no longer cover children (at least in my state, which is PA). The exception — in our family policy — is if the child is a full-time student; then the coverage is extended til the age of 23.

My oldest son will be graduating college in May, 2009. He will be 22 years old and, given the state of the economy, he will be facing the almost impossible task of landing a full-time job that will provide him with health insurance. It may take him several months or even years, during which time he will not have coverage!

I hope Obama can fulfill that promise. I’m not sure what will have to be done, but I guess it will require some act of Congress and we all know what that means — special interest influence (especially from insurance companies). It may take years before the needle moves on this issue through that process — too long to help my son and millions of other young Americans like him.

Here’s my “exact idea”: Declare a national health emergency and by executive decree require health insurance companies to extend coverage to children up to the age of 25. Probably not going to happen.

But how are we going to make these kinds of changes if we are hobbled by special interests?

There has got to be a way to get Congress to pass an emergency health plan — one small bill at a time — just a expeditiously as it passed a $700 billion bailout for the financial industry — a bailout that got us absolutely nowhere!

Thanks to My Twitter Pals I Donate $50 to Nothing But...