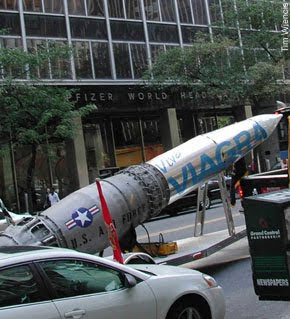 A Long Island man infringed on Pfizer’s trademark by towing a 20-foot replica missile with ‘Viva Viagra’ painted on its side through midtown Manhattan, eventually parking it in front of the drugmaker’s 42nd Street headquarters, a federal judge ruled (see “‘Viva Viagra’ Missile Infringed on Pfizer Marks“).

I commented on this story back in October, 2008 (see “The Erectile Projectile: A New Form of Outdoor Advertising“) and suggested that:

But Arye Sachs — the Long Island defendant in this trademark infringement case and the CFO (“Chief Fun Office”) of JetAngel.com, the co-defendant business he owns — insisted on tugging Pfizer’s cape. Not only did he tug, he virtually told Pfizer to “go f**k yourself” or some other profanity. I’m just guessing that’s what Sachs said based of this comment in the court decision: “Defendants’ email closed with a profane remark directed at Pfizer.”

That email message was delivered to Pfizer on September 14, 2008.

According to the judge’s comments, the defendants not only parked the missile in front of Pfizer’s headquarters, they also “exhibited the Viagra-branded missile at an adult entertainment exposition in New Jersey with a banner promoting its advertising services.” Sorry I missed that!

In the September 14 email to Pfizer, the defendants also announced their intention to take the missile on a twelve-city tour where they would distribute condoms “bearing the images of the candidates for President of the United States.” They also threatened to return to Pfizer headquarters with the missile, this time “featuring two female models ‘riding’ it and distributing condoms.”

It seems this whole thing was the brainchild of the advertising agency AVI Media Group, which claims to be “a dynamic, innovative design/interactive media firm dedicated to providing powerful solutions.” I only see one pharmaceutical company — Johnson & Johnson — listed in its portfolio of clients. I have no idea if J&J is a current client. But I don’t think J&J, the mommy & baby company, needs a relationship with an ad agency that threatens pharma companies and engages in unwholesome buzz marketing activities.

When Are Third-Party Online Discussions Not Independent of Pharma Influence? Survey...