In a New York Times Op-Ed piece, Daniel Carlat, a professor at Tufts Medical School and editor in chief of The Carlat Psychiatry Report, characterizes pharma-sponsored Continuing Medical education (CME) as “a new twist on that well-known instrument of corruption, money laundering.”

“[CME] content,” says Carlat, “is rarely developed by the identified experts. Instead, it is developed by the undisclosed communication company, which is paid by the sponsoring pharmaceutical company.” (see “Diagnosis: Conflict of Interest“)

“Daniel Carlat has a near hysterical piece about that equates pharmaceutical and biotech funding of CME to money laundering. Which I guess makes all the academics, researchers and clinicians who particpate…criminals? Carlat needs to take a dose of the trazadone he defends in one of his newletters that are available for a hefty fee. Which leads me to another point: nothing is stopping self-righteous types like Carlat from going into business themselves to offer CME programs. Oh, and if I were Carlat, I would drop the characterization ‘Unbiased’ from the description of his expensive newsletter. He is as biased as anyone. Anyone who calls his colleagues money launderers is biased.” (This is the entire post)

Some more from Carlat:

Drug companies should never have been allowed to become the primary educator for America’s doctors. The Accreditation Council for Continuing Medical Education, a nonprofit organization composed of the major medical associations, establishes the rules that govern continuing medical education. According to the guidelines, companies are forbidden from directly paying doctors who teach continuing medical education courses.

But the standards have a loophole that allows drug companies to circumvent the regulations. They hire for-profit “medical education communication companies” to organize the courses. These companies receive millions of dollars from drug companies to create course work and to pay doctors to deliver the content. Sometimes, they pay doctors to give lectures to other doctors. Other times, prominent doctors are paid to be listed as the authors of journal articles that are written by ghost writers, a practice that was extensively documented in court records from a lawsuit against Pfizer.

Here’s the data from ACCME showing the percent of CME income derived from pharmaceutical companies. If you include income from advertising and exhibits at CME events, pharma is responsible for 60% of all CME income (source: ACCME annual report data). 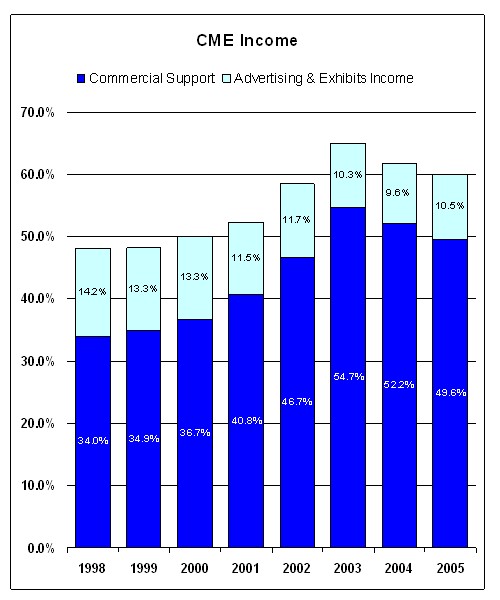 Carlat’s Solution?
“The solution could hardly be simpler,” says Carlat: “any continuing medical education that is paid for by the drug industry should not be accredited. Drug companies could still pay for any educational event, article or pamphlet they choose, but their courses and materials would no longer bear the imprimatur and implied credibility of accreditation.”