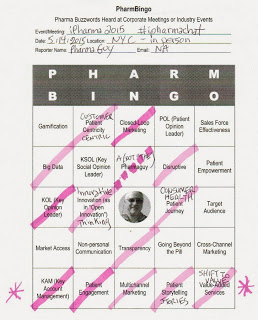 I am attending CBI’s iPharma 2015 conference in New York City. Yesterday was the first day. I chaired the Technology Track and moderated a panel discussion that attempted to answer the question: Can Mobile, Apps and Wearables Make an Impact on Health Outcomes?

Of course the answer was “Yes! And…”

As I learned from a previous speaker, that phrase was how “innovators” like Walt Disney suggested his staff greet new ideas instead of saying “No, because…” That is, people should add more suggestions for how the idea could work and not just shoot it down immediately.

It’s just one little thing I “learned,” which I can put into practice at my next homeowners board meeting when they try and shoot down my idea of using technology & social media to make running a homeowners association more transparent and inclusive. I imagine marketers — especially digital marketers — could apply the same thinking when their ideas are being shot down by MLR or upper management.

BTW, “innovators/innovation” is one of the terms on my Pharma Buzzword Bingo Card, which is shown in the accompanying image (updated at end of 2nd day). You can see that quite a few buzzwords (13) were mentioned during yesterday’s sessions (for a buzzword score of 54%). Note that the complete bottom row is marked off and I have achieved BINGO!

BTW, Peter Justason, Director of eMarketing at Purdue, began a remark in a panel discussion with the phrase “If you are a pharma guy…” He didn’t mean “The” PharmaGuy so I just put a dashed line through that in the card. Note: PharmaGuy is trademarked!

But enough of silly learnings. What did I learn that might be more useful for pharama digital marketers?

Todd Schmeling from Walgreens talked about the mobile apps that his company has created for customers AND non-customers to help them fulfill prescriptions and keep compliant with their medication regimen. One thing they are doing is allowing other organizations (pharma?) to link into their “Healthy Rewards” program via an API. I have to review my notes for the details, but it seemed that this is one other way that pharma companies can work with other stakeholders to bring useful mobile app opportunities to patients without building the apps themselves.

Lisa Valtierra, Assoc. Dir. Cross Cultural Marketing at Boehringer Ingelheim, gave a very entertaining presentation on how to create “Multi-Cultural” campaigns that really resonate with the “target audience” whether it be consumers or physicians. She spoke primarily about the latino audience. What I learned was that you can’t just translate from English into Spanish and get resonance with the latino community. Native Spanish speakers need all the nuances inherent in their native language to make a connection with the speaker and although all latino doctors can speak English, it is best to speak to them in Spanish. Also, latinos don’t relate to TV ads that do not include the whole family as part of the story. So single people (or even couples in bathtubs) do not resonate with them.

Sheldon Gilbert, Founder and CEO, Proclivity Media, gave a very technical but fascinating presentation on “programmatic buying” of online ads. As much as 40% of pharm.’s digital marketing budget may be spent on buying ads on online media sites (e.g., WebMD) and on search engines. Sheldon explained how machines buy and sell these ads and dove into the details of how to bid and win online auctions. Admittedly, the everyday pharma marketer probably has minions (i.e., consultants like Sheldon) to do this for them, but it’s always good to understand just enough so you can manage your minions rather than vice versa. Besides, you might want to hire Sheldon and his company. 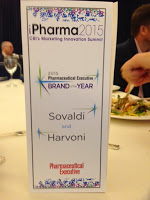 Brandon Graham, Chief Creative Officer, EUXmedia, talked about “storytelling” via video. Yes, it’s another one of my buzzwords.

One thing I learned from Brandon’s presentation is that it might be powerful to combine TWO buzzword activities: storytelling and the “patient journey,” but do it “episodically”; i.e., follow a “typical” patient through their journey from pre-diagnosis through therapy.

I’m not sure if this would work for all products, but it might work for Pharmaceutical Executive Magazine’s “Brand of the Year” announced at the meeting — Sovaldi and Harvoni.

The Gilead marketing representative who spoke during the luncheon award ceremony sure had some compelling stories to tell. Maybe I’ll have more to say about that later.

That’s all for now — I have to get back to the conference. Here’s the #ipharmachat Tweet stream in case you are interested:

Note: CBI is a client of mine and Pharma Marketing News is a Media Partner for this event.