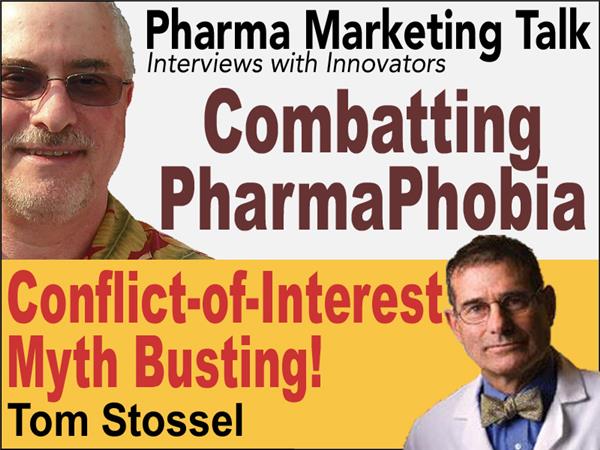 In PHARMAPHOBIA: How the Conflict of Interest Myth Undermines American Medical Innovation (Rowman & Littlefield, April 2015), Tom Stossel describes how an ideological crusade, stretching over the last quarter century, has used distortion and flawed logic to make medical innovation even harder in a misguided pursuit of theoretical professional purity.

As PHARMAPHOBIA contends, bureaucrats, reporters, politicians, and predatory lawyers have built careers attacking the medical products industry, belittling its critical contributions to medical innovation and accusing it of nonexistent malfeasance: overselling product value, flaunting safety, and corrupting physicians and academics who partner with it. The mania has imposed “conflict-of-interest” regulations limiting or banning valuable interactions between industry and physicians and researchers — while diverting scarce resources from medical research and innovation to compliance.

At the heart of this destructive conflict-of-interest movement is the false “insinuation that the medical products industry and those who partner with it are corrupt, placing personal profit above providing medical value. Because of its for-profit basis no proposal honestly put forward by private industry is above suspicion.” And according to this conflict-of-interest movement, the performance and dissemination of research done by industry or by industry-sponsored academic researchers is untrustworthy, as are efforts by medical product companies or physicians paid by them to make practitioners aware of such products and how to use them. The regulations that flowed from this false narrative have undermined scientific progress and stifled American medical innovation. The results are ruinous litigation, product excise taxes, price controls, weakening of essential patent protection, and other political rent-seeking schemes that erode corporate profitability and ultimately harm individual patients.

Thomas P. Stossel, M.D. is visiting scholar at the American Enterprise Institute for Public Policy Research. He is a hematologist and medical researcher at Boston’s Brigham & Women’s Hospital and Harvard Medical School where he is the American Cancer Society Professor of Medicine. Stossel is a frequent media guest who has appeared on major radio and television programs nationwide. His writings have been featured in The Wall Street Journal, USA Today, The Washington Post, Forbes, and other major publications. He has authored more than 290 publications and two textbooks, and is an inventor on 11 issued patents. He is an elected member of the National Academy of Sciences, the founder and scientific director of two biotechnology start-up companies, and a cofounder — along with his wife Kerry Maguire, DDS, MSPH, and others — of the medical outreach organization Options for Children in Zambia. Stossel is a graduate of Harvard Medical School.

The Intricacies of Rx Drug Advertising! Learn Rules & Regulations from a Master

The Utilization Plateau: Why Has the U.S. Pharmaceutical Market Stagnated?