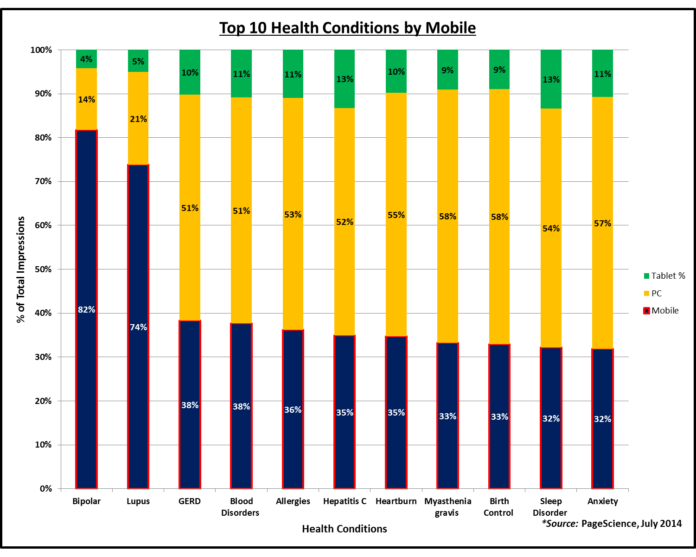 You don’t hear much about it, but pharma advertises on mobile devices. An Astellas marketing campaign for its overactive bladder drug, Myrbetriq, for example, included an interstitial ad in a mobile app that drove viewers to a mobile-optimized product information Web site (listen to this Pharmaguy Audio Snippet).

So, which medical conditions are most relevant for advertising by pharma on mobile devices? You might think that no matter what the platform — PC, tablet, or mobile — users would seek information about the same medical conditions, more or less. Thus, it’s a no brainer for mobile advertisers — just target the same potential patients you do on PCs.

According to an analysis of online impressions from PageScience, a contextual targeting digital ad agency, however, the platform DOES matter.

The table below shows the ranking by % impressions for the top 8 conditions accessed via mobile devices and compares that with PC and Tablet. The list may surprise you! 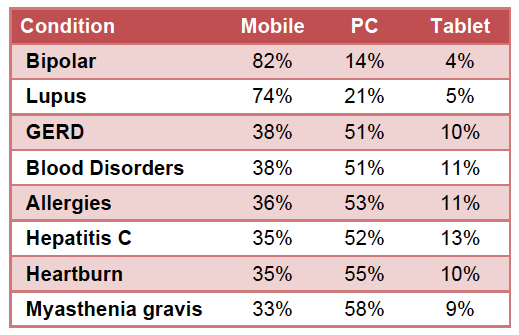 Dr. Janet E. Taylor, a leading New York City psychiatrist, offered an explanation for why bipolar is so popular with mobile health info seekers: “The average age of people presenting with bipolar disorder is 25 and women are prone to a higher prevalence of mood disorders (which also include major depression). They may prefer using their phones rather than computers in order to protect their privacy (important since there’s still stigma attached to mental health problems) and because they have access 24/7.”

But wait! Does this mean that pharma marketers should NOT do mobile ads for drugs that are not among the top 10 or 20 health conditions on mobile?

IMHO, no. Let’s use the Astellas campaign mentioned above as an example.

Overactive bladder ranks #61 on mobile devices — accounting for only 15% of total impressions. Yet Astellas’s mobile ad campaign was phenomenally successful. About 12% of users of the app which displayed the Myrbetriq ad clicked through to the website. The ad was successful because it was served up to to a receptive audience when it was most relevant to them.

Anyway, something to consider when you are planning your mobile ad campaign.