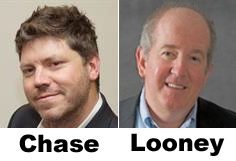 “As an industry,” Chase says, “we’ve never been comfortable working with moving targets. We like to test things over time, not experiment on the fly. We’re far more comfortable establishing procedures than establishing relationships. We like to follow regulations to the letter, not follow conversations we didn’t start and cannot control. We like finite endpoints, not endless continuums. We often put incomes before outcomes. And while we have zero tolerance for failure by our own definition of the word, we’ve been blissfully and ignorantly failing our customers by theirs.”

That’s a lot of use of the first person “we.”

I’ve often  noticed Chase’s propensity to speak as if he was or still is employed by the pharmaceutical industry rather than as a journalist or observer (i.e., third person) reporting on the industry. It reminds me of the old Mad Magazine cartoon, where the Lone Ranger and Tonto are surrounded by hostile native Americans. The Lone Ranger says to Tonto “what do we do, now?,” to which Tonto replies, “what you mean ‘we,’ kemosabe?”

Meanwhile, back at the Pharmaceutical Executive ranch, Editor-in-Chief William Looney, who worked at Pfizer for 12 years before joining PE, writes in the third person about GSK’s China Syndrome; i.e., accusations of bribery (here). Looney actually offers some helpful advice as an outsider (i.e., “third person”). He says:

“Big Pharma has no option other than to unilaterally change its game—and take the hit by lowering expectations on future revenue growth in China and other emerging markets. You can call it leading from behind—by being up front.”

Them’s strong words coming from a former industry insider. Of course, when it comes to bribery, it’s best not to align yourself too closely with the industry by using the first person narrative style.

Still, I find former “insiders” who give advice to the industry to be more helpful than those who have never worked in the industry (present company — me — excluded :-). It’s amazing too that the advice they give is pretty radical such as John LaMattina’s advice to pharma to “drop TV Ads” (see “Drop TV Ads, Says John LaMattina, Former Pfizer President of R&D“).
But, to be honest, when it comes to having a beer and some laughs, I’d prefer Chase’s company. Not that Looney isn’t a barrel of laughs! I just don’t know him well enough… yet.