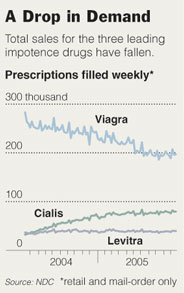 As reported in Sunday’s New York Times, sales of erectile dysfunction drugs (Viagra, Cialis, Levitra) are falling (see figure at left). “…the market for impotence medicines appears to have fallen well short of what was once predicted,” according to the story.

“Heavy advertising to consumers, totaling more than $400 million in 2004, has made Viagra and its newer competitors, Cialis and Levitra, among the best-known drug brands in the United States, and their combined global sales reached about $2.5 billion last year. But the number of new prescriptions for the drugs has fallen steadily this year. Doctors wrote about 10 percent fewer new prescriptions in October than they did in October of 2004.” [NYT]

The article suggests that the drop in prescriptions for these drugs is “another sign of the limits of consumer advertising to drive demand for drugs.” The article claims that the “effectiveness of television advertising for prescription drugs may be wearing off” and an analyst claimed: “Pharma ads have less impact than they used to, because we’re accustomed to it.”

Another explanation was offered by Matt Beebe, United States brand team leader for Cialis, who said: “Both the media and analysts have overstated the size of the market for impotence drugs.”

Did Matt happen to read by blog back in January when I said virtually the same thing? What I said was: “I think the marketers are drinking their own Kool Aid. They have overestimated the market and tried to put too many men in the ED category.” (See “ED Drug Sales Limp“)

[Beebe criticized the media and Wall Street analysts for overstating the market, not his company’s executives who fed market expectation numbers to the media and analysts. He remains positive with regard to the growth of the ED marketplace.]

Since January, the ED marketers — at least the Viagra and Levitra marketers — have made some changes to their campaigns. These tactics involve convincing more men to talk about the “problem” with their docs. Pfizer (maker and marketer of Viagra) will run unbranded ads — ads that do not mention Viagra — to motivate men “to make the call” (see “Pfizer Tries Unbranded ED DTC Ads“). Bayer (marketer of Levitra) will employ Jerry Hall to be “Global Ambassador for [Bayer HealthCare’s] Erectile Dysfunction Campaign” (see “Jerry Hall, Women and Pharma Marketing“).

It seems that the Viagra and Levitra marketing teams do not think that the market for ED drugs have been overestimated. They just think that men need more motivation.

“We think there’s an opportunity to expand awareness and usage,” said Greg Duncan, a senior vice president of United States marketing for Pfizer. Many men are still reluctant to ask their doctors about Viagra, and Pfizer wants to remove any stigma still associated with erectile dysfunction, he said. Pfizer also plans to encourage younger men to take Viagra, Mr. Duncan said. [NYT]

ED Becomes EQ
Meanwhile, marketers of Levitra — the market laggard — apparently have solved the ED stigma problem. They merely have ditched “dysfunction” and added “quality” and, voila, have come up with “Erection Quality” or EQ! The Levitra product web site features “erection quality” on every page and includes a campaign to “talk to your doctor about improving erectile quality (EQ).”

This is a testament to the staying power of pharmaceutical marketers! They just won’t admit that the product may not be working as advertised or that not everyone who suffers from ED want to be helped. In fact, they may not be a position to be helped even if they wanted it.

According to the NYT story: “In some cases, older men do not use the drugs because they have grown used to sexless relationships, because their spouses are physically unable to have sex, or because they are no longer interested in intercourse.”

“With older men, some of them lose their partners, because their partners die or get sick, or they may develop an illness that reduces their sexual interest,” said Dr. Ira Sharlip, clinical professor of urology at University of California at San Francisco.

Pharma’s ObamaCare Math: It All Adds Up, But…