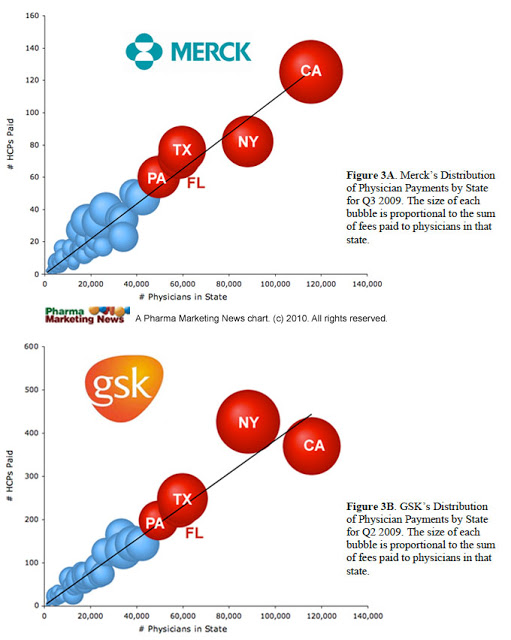 In the January issue of Pharma Marketing News, which will be published today, one article focuses on payments made to physicians by Merck, GSK, and Lilly (see “Pharma Begins to Reveal Payments to Physicians: Analyzing the Numbers to Spread the Sunshine“). Figures 2 and 3 from that article are reproduced below:

New York stands out as a state receiving not only the highest total payments (#1 for GSK and #2 for Merck), but also on a per physician basis. If all the money GSK paid to physicians in NY were spread equally among all the 26, 716 physicians in the state, each physician would get $70.17. In comparison, for Merck that number would be $12.06 per physician, which is low by comparison with GSK, but still the highest for any state in Merck’s dataset. California’s physicians, on the other hand, did not seem to get enough compensation to adequately educate its large physician population. In other words, if pharma payments to physicians are primarily to help educate physicians about products, then California physicians are getting less education than NY physicians.

“Does anyone have any ideas as to why GSK might fund a disproportionately higher number of New York based health care providers compared to other states?,” asks Eric Milgram, who writes the Pharma Conduct blog. See his analysis of GSK’s payments to physicians here: “An Analysis of GSKs Speaker and Consulting Fees for 2009 Q2.” Great minds think alike!

Neither Eric nor I have an answer to the question posed above. But now I know why my niece’s husband wants to practice medicine in New York! Just kidding, Nick! I know you are one of those medical students who refuse to receive gifts from pharma companies. BTW, Nick, did you know that New York’s Governor Patterson is proposing to prohibit “Inappropriate Gifts to Doctors” by pharmaceutical companies in an effort to balance his state’s 2010-2011 budget?

According to the Governor’s Briefing Book:

“Pharmaceutical companies and their representatives would be restricted from providing inappropriate gifts or misleading/inaccurate information to doctors to promote utilization of a drug.”

“This will benefit patient care and reduce costs in the Medicaid program, as more expensive drugs will not be prescribed for the wrong reasons,” Paterson said (see “New York Governor Proposes Limits on Access to Pharmaceutical Information“).

But will GSK continue to reward NY physicians with lucrative speaking and consulting gigs if this budget is passed that includes the restriction on gifts to physicians?

This still does not answer the question about why GSK favors NY physicians… But wait, I think that I have the answer to the question! GSK has anticipated Patterson’s proposal to stifle pharma largesse in New York and has disproportionately given physicians in that state lucrative speaking and consulting jobs to endear them to its cause and fight against the restrictions proposed by Patterson!

No that can’t be right! California probably has a larger budget deficit than does New York. Yet it’s not getting a disproportionate amount of physician fees.

If you have the answer, please let me and Eric know. We are planning to do a podcast together on this subject.

Will FDA’s SM Guidance Resemble Suggestions Made by Industry Group Back...