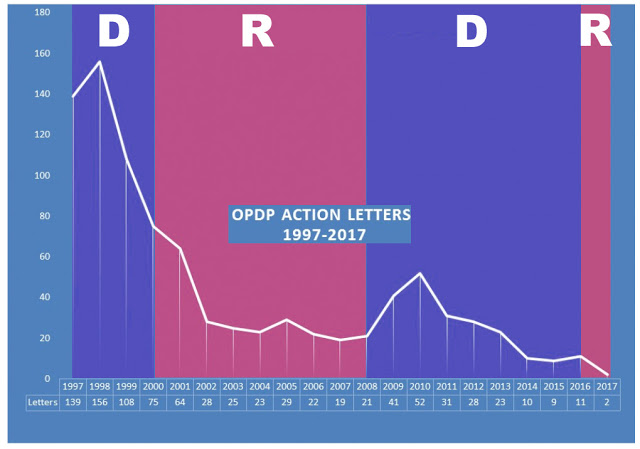 That’s one question on the mind of EyeOnFDA author Mark Senak of FleishmanHillard’s Washington, D.C. office. Senak plotted the number of “Action Letters,” which are Warning Letters to drug company CEOs plus so-called “untitled” letters addressed to underlings – usually regulatory officers. I copies his chart – find the original here – and highlighted the years in which a Democrat (D; blue) or Republican (R; red) was in the White House.

The FDA’s Chief Counsel between August 2001, and November, 2004 was Bush-appointed Daniel E. Troy. Soon after being appointed, Troy instituted a legal review of regulatory letters before they were issued and this policy change effectively hobbled the issuance of these letters by the FDA. Troy’s delaying legacy continued after he resigned. (see “FDA DTC Review: The House that Troy Built”).

Unless the FDA issues a bunch of new letters in the final 2 months of 2017, the total count will be at an historic low. Obviously, this is in tune with the current administration’s focus on de-regulation.

Now we have Trump-appointed Dr. Scott Gottlieb as head of the FDA. What will his impact be on FDA enforcement activities?

“Aside from the tangle of industry ties, Gottlieb has advocated dangerous deregulatory approaches to the review process for new medications. In exchange for getting medications to the market faster, Gottlieb is willing to accept a greater degree of uncertainty about safety and effectiveness at the time of approval. He also has favored looser restrictions on off-label promotion.”

My guess is that we may see one or two more letters before the end of the year. Still, that would be the lowest number since at least 1997 when FDA first started regulating DTC advertising.