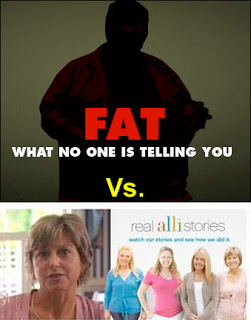 By now you probably have read about GSK’s announcement that it will finance a NEW “hard-hitting” documentary about eating (see “Alli Marketer (GSK) To Produce Documentary Film on Eating“). [OK, it’s not about obesity per se, but I expect to see a lot of fat, even obese people featured in the movie.]

An Academy Award-winning director will be named on Jan. 25 at the Sundance Film Festival. I’ve asked to be invited to that Sundance announcement (see “GSK: Please Invite Me to the Sundance Panel & Screening of Your New Alli Inspired Documentary Film“). I am still waiting for GSK to make an offer.

In case you don’t know, GSK markets Alli, the over-the-counter (OTC) weight-loss drug with the “Oops, I pooped my pants” side effect (see “Alli Newspeak: Oily Spotting is ‘Treatment Effect'”). Does that mean the film will be a blatant promotion for Alli? Not at all, says Rachel Ferdinando, a GSK marketing executive.

“The filmmakers can make a decision about whether Alli is important,” she said. “We want it to be entirely transparent; we want it to have integrity. It’s a fantastic outcome if people are simply more educated.”

Then why should GSK spend money on a new film when it was a major sponsor of a 2006 documentary on obesity produced by PBS: “Fat: What No One is Telling You”? This film has high integrity — it was narrated by Meredith Vieira, the well-respected co-anchor of the NBC News’ TODAY show. “Fat” is also a very popular film according to social media rankings at NetFlix.

I watched “Fat” over the weekend with my family and we enjoyed it very much. Amazingly, even my son watched it till the very end – that says a lot because it competed for his leisure time with the video game “Call of Duty 4: Modern Warfare.”

One thing I noticed about “Fat” was its nearly total lack of interest in mentioning medication as an option to treat obesity. I think it vaguely mentioned “pills” once. Instead, it focused a great amount of time on gastric-bypass surgery. As one NetFlix reviewer said “Its like an infomercial for gastric-bypass surgery, from the company that thrives on gastric problems (Tums, Tagamet,et al.)”

It’s a stretch to believe that GSK would be happy with all the attention “Fat” paid to the surgery solution because it makes money from Tums.

In fact, I believe that GSK is sponsoring a NEW documentary on obesity BECAUSE “Fat” spent too much time on the surgery solution — one of the main characters of the film had the surgery (Rocky, a teenage boy) and lost 140 lbs. We all felt happy for him as the documentary ended with Rocky walking to school with a smile on his face. Gosh, I was ready to go out and get myself some surgery after seeing that!

I predict that GSK’s new movie will have practically ZERO to say about gastric-bypass surgery and definitely will not feature any surgeons as did “Fat.” It may not mention Alli by brand name, but I am SURE it will mention the “miracle” and “promise” of new medications, including over-the-counter medications. But it will warn viewers about “miracle cures” they may see available on the Internet and suggest that they look for reputable products approved by the FDA (Alli ads emphasize that Alli is the only OTC weigth-loss product that was approved by the FDA).

So that’s how a pharmaceutical company creates a “non-marketing” film to market a brand name drug. Time will tell if I am right.

P.S. This illustrates the problem with “unrestricted” grants, which is how GSK sponsors these films. Even though GSK can say it has no editorial control, if it doesn’t like the result it is not likely to give another “unrestricted” grant to the film producer. Sorry, PBS, no grant for you this time! The grant for the NEW film goes to the Creative Coalition, a nonprofit social and political advocacy organization backed by prominent entertainers like Alec Baldwin, Tim Daly and Susan Sarandon.

Where Have All the “Really Good” Marketers Gone?