I, and others, have often criticized pharms’s forays into social media as being “inauthentic” because no real dialogue is allowed (see, for example, “Pharma “Social Networks”: Close But No Cigar Award“). Without the dialogue, social media campaigns are not likely to reach full potential by “going viral,” which is the point recently made by my Twitter friend @jonmrich during an #hcsmeu discussion last Friday. “Here’s a hint for pharma,” said Jon, “Nothing will go viral if you don’t allow ‘Likes’ or comments. Guaranteed.”

There are, however, a few pharma social media sites that DO allow comments and Johnson & Johnson (JNJ) leads the pack in that regard.

Today, I discovered (hat tip to @andrewspong) that Janssen-Cilag, Ltd, part of the Johnson & Johnson family of companies, is probably the first European pharmaceutical company to produce a non-branded disease awareness YouTube video that allows comments and “Likes.” The video is entitled “ADHD: A day in the life by Janssen-Cilag Ltd.” You can view the video here or see embedded version at end of this post. But just in case it is pulled in the future, here’s a screen shot: 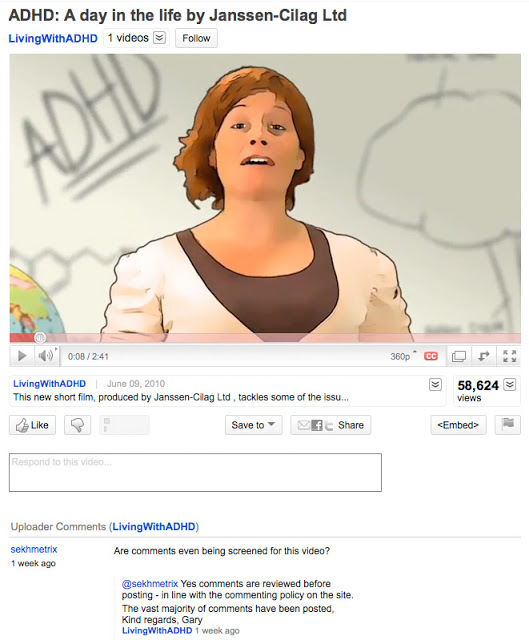 According to the channel notes “This new short film, produced by Janssen‐Cilag Ltd , tackles some of the issues surrounding Attention Deficit Hyperactivity Disorder (ADHD) from the perspective of a child with the condition. For more information visit www.livingwithadhd.co.uk.

“The film was made after talking to groups of doctors, patients, parents and teachers, who told us that too often people think ‘ADHD’ is just an excuse for ‘badly behaved kids’. The film should help people understand what it’s like to actually have ADHD.

“If you know anybody affected by ADHD, please do share this film with them. Together, let’s make sure all families get the help and support they need.”

The “Commenting Policy” states “All submissions will be reviewed and may not be posted if deemed inappropriate. Comments which are off-topic, offensive, or promotional, will not be posted. Please note that we will not post comments about any specific products or treatments, whether they are sold by Janssen-Cilag Ltd or not.”

@garymonk, who apparently is the person responsible for this YouTube site, says that Janssen-Cilag has published the “vast majority” of comments. I believe it because there is “a couple of spats boiling away” according to @andrewspong, another Twitter friend of mine.

The site also allows visitors to vote whether or not they “Like” the video. As of today only 51 votes have be cast (43 like the video, 8 do not like it).

It’s interesting to note that the Johnson & Johnson (JNJ) YouTube video, “Brad’s Story: A 12-year old with ADHD,” is at the top of the list of related videos. It also allows comments and “Likes.” The JNJ ADHD video was uploaded to YouTube back on June 22, 2009 and has been viewed 62,983 times (150 “Likes” vs 12 dislikes). So, by that measure, the Janssen-Cilag video is doing rather well. It should be pointed out that JNJ’s YouTube Health Channel includes 302 videos. In all, the total upload views for JNJ’s videos is 2,170,352.

JNJ Health Channel’s Rob Halper, Director, Video Communication at Johnson & Johnson, is a “Friend” of Janssen-Cilag’s Living with ADHD. “Great channel! Terrific﻿ contribution to You Tube,” said Rob. BTW, Rob Halpert is one of the people nominated (by me) to receive the coveted Pharmaguy Social Media Pioneer Award (see the announcement below).

We might be tempted to give Janssen-Cilag a reward for launching “ADHD: A day in the life” social networking campaign. But instead of having awards for specific pharma social media sites or campaigns, why not give awards to the pioneers who have lead the way? We can learn more from how these pioneers overcame the obstacles to launch social media projects or promote social media than from the end result – even if the end result is flawed. People tend to live much longer than their creations and pharma social media pioneers are no exception. They may move on to new positions and spread their influence far and wide.

Who is @garymonk, for example? I want to know more about this person. How did he get to be in charge of the Janssen-Cilag YouTube ADHD channel? What are the issues he had to deal with? Etc.

That is what the Pharmaguy Social Media Pioneer Award is all about. Let’s discover the pioneers and hear their stories. Please use this online form to nominate candidates. The introduction explains the rules for nominating candidates and you can also vote on a dozen or so candidates that I have already chosen.

P.S. I found out who @garymonk is. He is Gary Monk, a Product Manager (Marketing) at Janssen Cilag and, according to his LinkedIn profile, he has already won a few awards such as: The “2009 PM Society Digital Awards – Triple Award Winner (1) Best overall promotional solution (2) Best Integrated Campaign (3) Best Edetail.” Nevertheless, I added his name to the nominees for the Pharmaguy Social Media Pioneer Award.