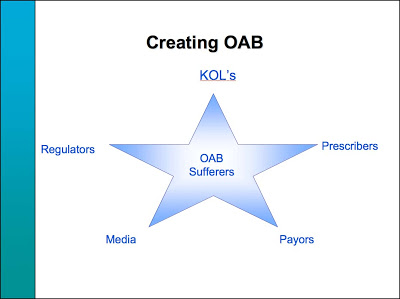 The link is to a press release that reports the results of a study that purports to show that Toviaz (a reformulation of off-patent Detrol) is “statistically significantly superior to placebo” in treating OAB (Over Active Bladder). The “statistically significantly superior” results were “based on patient self-reporting,” which is a very subjective measure of efficacy to say the least.

OAB is one of those “medical conditions” that has been refurbished by the drug industry so that more people — especially women — can believe they have a problem requiring treatment by a pill rather than by some other, less invasive, means. I wrote about this before — see “Overactive Bladder: ‘Pharmacia instrumental in creating new disease’ says Former VP.” Pharmacia was purchased by Pfizer after that post was made.

“In the case of OAB, Pharmacia (and later Pfizer and others) provided an acceptable name for the condition, increased awareness, and provided access to effective treatment for a large group of patients (women especially) suffering a hugely difficult condition.
Your wife, your choice – diapers or Detrol?“

I thought the last sentence was worth immortalizing in the title of this post because it is said that OAB is one of those conditions that “women especially” suffer from.

The Pfizer press release claims that “approximately 33 million Americans are estimated to suffer from overactive bladder symptoms.” It doesn’t say how many of these Americans are women, but the Toviaz Web site features a woman posing as a patient (“Not an actual patient”) as in this banner:

Yesterday, I asked “Do Women Take More Drugs Than Men Because They Need To or Because They Are Targeted by DTC Advertising?” (see here). Toviaz ads (eg, the Toviaz.com Web site) demonstrate how women are targeted by direct-to-consumer (DTC) advertisers. As I mentioned in yesterday’s post, I plan to discuss this in an upcoming Pharma Marketing Talk LIVE podcast discussion tomorrow (see “How to Score With Women (as a Marketer) via Social Media“).

One other thing I have to say about the @pfizer_news tweet is that it is an example of a branded tweet that may not comply with FDA regulations because it mentions a brand name drug plus its indication but does not include any “fair balance” (ie, major side effect information) as required by law.

Most pharma social media initiatives such as company blogs and twitter accounts (including @pfizer_news) are managed by corporate communications people who are increasingly taking on the role of brand marketers. These people tend to think of themselves as outside of FDA’s purview. Consequently, Pfizer may claim that the Toviaz-branded tweet is notice of a press release, not advertising, and that the press release contains the necessary fair balance (albeit one click away).

In the post about OAB mentioned above, I included slides from a Pharmacia VP that demonstrate the importance of PR and the media in “creating a new disease.” One slide said “Drive potential patients to physician offices by using DTC and PR with symptom recognition.” Another slide (see below) shows that the Media are an important component in creating consumer demand:

Games vs. Mobile Health Monitoring Devices: Which is a Better Motivator?