The Utilization Plateau Why Has the U.S. Pharmaceutical Market Stagnated?Click Here for Additional Resources

A conversation with Todd D. Clark, President of Value of Insight Consulting (VOI) and the author of pharmahandbook® and generichandbook™ (see Bio), about the U.S. Rx prescription drug “Utilization Plateau.” The discussion will feature a recent white paper developed as an excerpt from VOI’s new edition of the United States Market: pharmahandbook® publication, and focuses on why the pharmaceutical market growth in the United States has slowed dramatically and what the pharmaceutical industry can do to avoid the slow-growth trap.

Listen to internet radio with Pharmaguy on BlogTalkRadio
You can visit this Pharma Marketing Talk Segment Page and listen to the live show or the archived audio podcast afterward. This show and ALL Pharma Marketing Talk shows are available as podcasts via PMT on iTunes (FREE!). Background 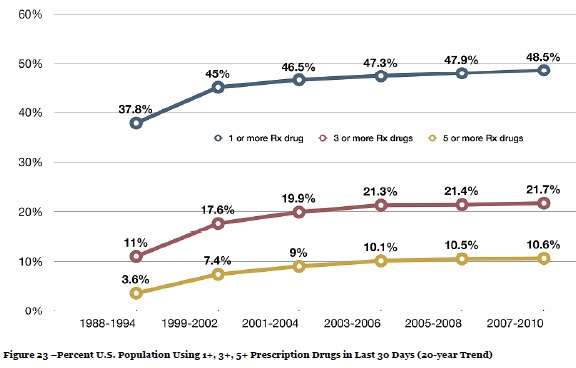 Source: VOI white paper: “U.S. Utilization Plateau”
The 1990s are understandably thought of as a golden age in the U.S. pharmaceutical industry. The average number of new molecular entities approved each year was one-third higher than in the 2000s (31.1 versus 23.3), the majority of these drugs were in mass-market, primary care segments that resulted in blockbuster sales, and marketing regulations, particularly on direct-to-consumer advertising, were substantially relaxed. Best of all, between 1995 and 2000 sales growth averaged 14% annually and approximately 80% of this increase was driven by non-price factors (e.g. volume, displacement of older for newer therapeutics, etc.).

Even as the industry moved into the 2000s, a period characterized by fewer approvals, niche therapies, aggressive pricing, and patent expirations, there was a widely held belief that the market would continue to experience strong growth due to an aging population and the creation of the Medicare Part D drug benefit. Although these have and will continue to have an effect on drug sales, their impact has been offset by a number of countervailing forces, some related to the worsening economy and others to structural issues within the pharmaceutical marketplace.

Calculations of data from IMS and the U.S. Census Bureau show that, between 1997 and 2002, the number of prescriptions filled per person went from 8.9 to 11.7, an increase of 31%. By 2007, per capita consumption had increased to 12.8 prescriptions, a 9.4% increase over 2002 and roughly one-third the utilization growth rate seen in the previous five-year period. In 2012, average consumption equaled 13.1 prescriptions per person per year, only 2.3% higher than in 2007. Put differently, during the five years ending 2002 utilization grew 13 times faster than in the five years ending 2012.

Todd Clark is President of VOI and author of many pharmaceutical industry publications including pharmahandbook® and generichandbook™. During more than 20 years in the life sciences field, he has consulted with 19 of the top 25 drug companies, leading biopharmaceutical firms, generic drug manufacturers, investment banks, venture capitalists, and law firms — advising them on global strategies regarding market entry, clinical trial design, intellectual property issues, regulatory compliance, marketing strategy, competitive intelligence, pricing, reimbursement, brand-generic defense, allocation of sales-force resources and more. He is a member of the pharmaceutical advisory team for the Gerson Lehman Group, has served as an expert witness in pharmaceutical industry litigation, and is frequently quoted in trade publications.

Todd is a graduate of Tulane University and holds an MBA from the Kellogg School of Management at Northwestern University. In addition to his duties with VOI, he is an adjunct professor at Tulane University, teaching courses on marketing, business strategy and managerial decision-making. He developed a healthcare management curriculum for Tulane and taught healthcare policy, payment and regulation within that program. In addition, he serves on the Business Studies Advisory Group for Tulane.

Is Your (Marketing) Head in the Cloud?