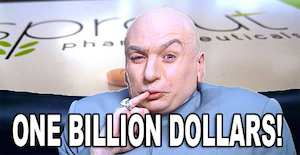 Shortly after the FDA approved Addyi (the “pink pill”), Canadian pharma company Valeant announced it would buy Sprout for $1 billion. Was it a good buy?

Firstly, where does a Canadian pharmaceutical company come up with one billion dollars?

Secondly, how long will it take to recoup that and other costs associated with selling Addyi and start to make a profit? 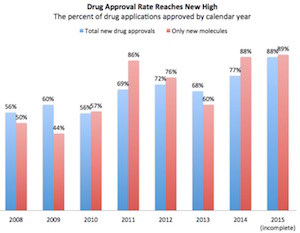 We just got treated to a whole lot of drama this week as to whether Addyi, a drug to boost women’s libidos, would be approved. But based on the data, that approval was probably a foregone conclusion.

As recently as 2008, companies filing applications to sell never-before-marketed drugs, which are referred to by the FDA as “new molecular entities,” faced rejection 66% of the time. Yet so far this year the FDA has rejected only three uses for new chemical entities, and approved 25, an approval rate of 89%.

In reality, the FDA approval rate is more like 96%.

Learn Why Here
P.S. It’s no coincidence that this is happening as FDA sets its sights on PDUFA VI reauthorization. 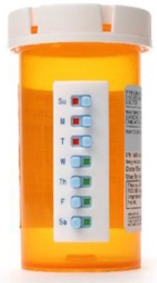 In its latest legal saga, the drugmaker is going head-to-head with a woman who claims that Lilly stole her idea for a tool that helps patients’ remember to take their meds.

Plaintiff Lisa Duer filed a complaint alleging that Lilly at first tried to license her patented “Take-n-Slide” adherence gadget. But after the negotiations fell through, Lilly and its supplier, Bensussen Deutsch & Associates, simply copied Duer’s idea instead, the suit claims.

This has all the dramatic BIG CORPORATION vs little guy overtones as in the 2008 movie Flash of Genius, which focuses on Robert Kearns and his legal battle against the Ford Motor Company when they developed an intermittent windshield wiper based on the inventor’s ideas. 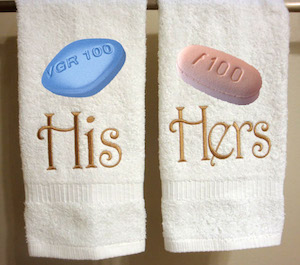 His and Hers Hand Towels Monographed with Viagra and Addyi Logos Only $20!
$20.00 USD