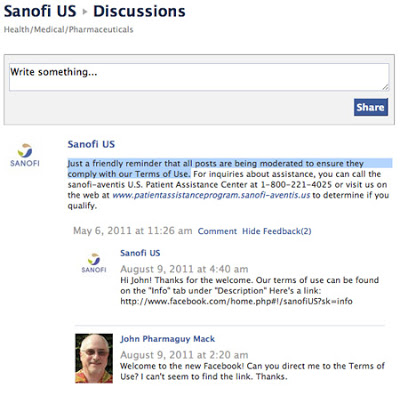 Pharma Facebook Pages Being Phased Out A Good Run While It Lasted! 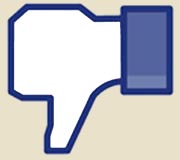 No doubt you’ve heard that as of August 15, 2011, Facebook will be opening up comments on ALL pharma pages with some exceptions (listen to these podcasts: “Implications of Facebook’s Page Commenting Changes: Turning Off Comments May Be a Problem” and “Pharma Facebook Commenting Changes: The ‘Final’ Story“). That means that the pharmaceutical industry will no longer be able to shut off comments on their Facebook pages. This has lead to speculation that many pharma FB pages will be shut down come August 15.

A couple of pharmaceutical companies have already taken down their Facebook pages or announced they will do so. These include Janssen’s ADHD Moms page, which was the first pharma Facebook page, launched in June, 2008, by McNeil Pediatrics (see The Pharmaguy Social Media Timeline™). 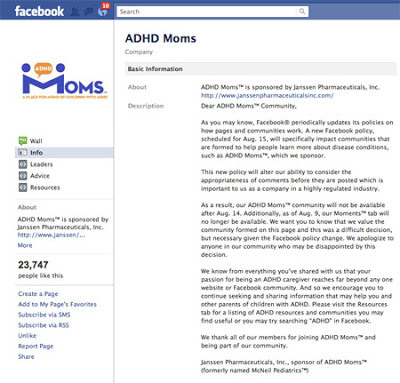 “A new Facebook policy, scheduled for Aug. 15, will specifically impact communities that are formed to help people learn more about disease conditions, such as ADHD Moms™, which we sponsor,” says a note on the ADHD Moms page.

“This new policy will alter our ability to consider the appropriateness of comments before they are posted which is important to us as a company in a highly regulated industry.”

“As a result, our ADHD Moms%reg; community will not be available after Aug. 14. Additionally, as of Aug. 9, our Moments™ tab will no longer be available. We want you to know that we value the community formed on this page and this was a difficult decision, but necessary given the Facebook policy change. We apologize to anyone in our community who may be disappointed by this decision.”

Sanofi-Aventis said it would discontinue its VOICES page, which became infamous when it was attacked by a “disgruntled” patient (see “Disgruntled Patient Shuts Down sanofi-aventis Facebook Page“). 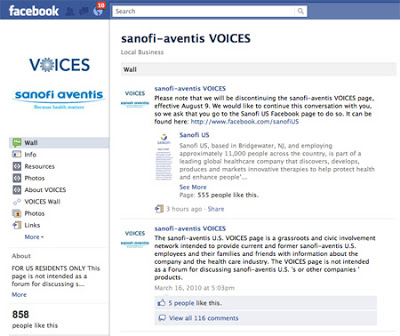 “Please note that we will be discontinuing the sanofi-aventis VOICES page, effective August 9. We would like to continue this conversation with you, so we ask that you go to the Sanofi US Facebook page to do so.”

This marks a turning point in pharma social media. Janssen effectively abandoned 23,725 (more or less) people (including 28 0f my Facebook friends) who “liked” ADHD Moms. It offered no alternative to these people other than third-party resources. Sanofi-Aventis, on the other hand, directed its 859 friends (including 22 of my friends) to its Sanofi US Facebook page, which currently is liked by 360 people (including 11 of my friends).

On the Sanofi US Facebook page, the company states that “To comply with applicable Laws and regulations, we do not use the standard Facebook wall for discussion.” It does, however, allow comments on a special “Discussions” page where it previewsthem before being posted. “Just a friendly reminder that all posts are being moderated to ensure they comply with our Terms of Use,” said Sanofi.

I had problems finding the Terms of USe, so I posted a question asking where I could find them. I received a reply within 2.5 hours (see screen shot below). The time stamp is odd – I actually posted my question around 3 or 4 PM Eastern US, but the time stamp says 2:20 AM; perhaps my Twitter pal @jonmrich can explain this discrepancy. Another thing Jon might be able to explain is how come Sanofi can still have comments shut off on its wall?

Did the new Facebook policy actually cause these companies to shut down their pages? Janssen seems to put all the blame on Facebook whereas Sanofi seems to blame “Laws and regulations,” implying government interference. Of course, there are NO federal Laws or regulations specifically prohibiting Sanofi or any other pharma company from using the “standard” Facebook wall for discussions.

Blaming Facebook or “Laws and regulations” for this reminds me of the final scene of King Kong where the beast is lying dead at the foot of the Empire State Building:

Police Lieutenant: Well, Denham, the airplanes got him.
Carl Denham: Oh no, it wasn’t the airplanes. It was beauty killed the beast.

I think there are other reasons why these pages are being shut down — (1) one (ie, ADHD Moms) may have outlived its usefulness, and (2) one (VOICES) may have been ill-conceived in the first place, giving no benefit to the company and having a tainted history. In these cases, it’s just best to shut them down and move on.

Unfortunately, Janssen doesn’t seem to have an alternative FB page. It just “abandoned” its 23,725 FB friends. In the scheme of things, this is not a big number considering that Janssen claims ADHD “impacts five million children in the United States, while nearly eight million adults have been diagnosed with the condition” (see here). 23,725 represents only 0.47% of the children’s ADHD market. In other words, ADHD Moms was a dismal failure in terms of reaching this market – maybe.

Over the next few days I will maintain a vigil over the pharma Facebook death march. Help me by letting me know of other pharma Facebook pages that announce their demise.

Video: A Major Driver of U.S. Digital Display Ad Spending Growth in 2020 and Beyond

A Practical Guide to Personalization

ABOUT US
The Pharma Marketing Network® was established in 2003 by John Mack (aka Pharmaguy). Our ongoing mission is to foster a community for the pharmaceutical and healthcare marketing ecosystem designed to understand the challenges and trends of today, while collaborating to shape the future.
Contact us: info@pharmaguy.com
FOLLOW US
© 2020. Pharma Marketing Network. All rights reserved.
MORE STORIES
2011