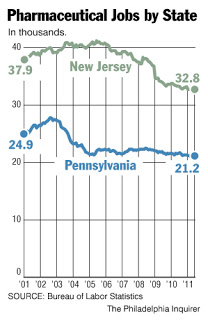 “In pharmaceuticals, they are not laying off 500 people here and there,” said Alma Azua-Cassady, who worked in health-care marketing until she lost her job at AstraZeneca P.L.C. in December 2008. “They are laying off 12,000 people at a time,” she said. Alma was quoted in today’s Philadelphia Inquirer (see “As Big Pharma downsizes, a major loss of brain power“).

The article included the chart on the left, which tracks pharma jobs in NJ and PA over the past 10 years.

The article blames generic drug competition as the drug industry loses patent protection on blockbuster drugs and consolidation (ie, mergers) in the industry as a result.

The article cites the “multiplier effect” — a term economists use to measure the ripple effect of each dollar as it moves through the economy. Rutgers’ economists, for example, estimate that each dollar that a pharmaceutical company spends on salary dollar adds roughly $1.50 to the economy.

The unemployed pharma people the article talks about used to work for BIG pharma companies like Merck and Astrazeneca. These people are finding it hard to find similar jobs at other big pharma companies.

A recruiter was quoted as saying “The companies who are hiring are smaller, midsize companies. These are great companies – but they don’t have the sheer volume of jobs that the Mercks of the world did.” The small firms worry that former employees of big companies are too specialized, unable to handle a range of tasks.

Coincidentally, I just received a resume in the mail from someone who was recently laid off from a SMALL specialized pharmaceutical company located in Yardley, PA, which is a town just down the road from where I live and work. The company recently merged with another small pharma company to form a new “specialty pharmaceutical company.”

It seems that consolidation is not just limited to the big guys. Perhaps we will see a new wave of layoffs of people working in small specialty pharma companies as well!

Unfortunately, all this employment “drain” has nothing to do with “brains,” just the relentless pursuit of profits at all costs whether it be a big or a small pharma company!

Rethinking the Value of DTC Advertising