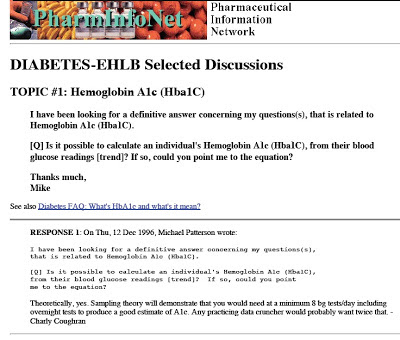 The Role of Social Media in Managaing Chronic Diseases Focus on Diabetes and Obesity
In an “Open letter to NPR about Diabetes Social Media piece,” Kerri Morrone Sparling of Six Until Me, attempts to refute a claim made by Jason Bronner, a doctor at the University of California San Diego Medical Center, who said “There’s no proof in diabetes that social networking is helpful.”

“We know a lot of patients are on the Internet. Patients are more likely to get information from the Internet than they are from the doctor,” says Bronner. His study, however, seeks to determine whether or not online scoial networks such as Wellaho, which he has a stake in, help patients manage their disease. Dr. Broner’s study was featured in a segment of a local San Diego NBC affiliate news program, which concluded with a statement from Dr. Bronner’s group that said “social networks outside [my emphasis] the Internet do improve chronic disease management”:

Social Media and Support
Sparling says “initial evidence suggests that the benefits of social media to people living with chronic illness are real, even though large scale studies have not shown precisely who benefits and how much” and

“Dr. Bronner’s study leaves out one of the most important benefits that is consistently mentioned by people with diabetes online: connecting with others. When they connect, they no longer feel alone, and they receive much needed emotional support to help them go through the ups and downs of life with this chronic condition. And some of the end result measurements of health outcomes in diabetes, such as HbA1C, fail to capture all the preliminary steps necessary to achieve the behavior changes that result in improved, quantifiable outcomes.”

OK. What we have here is a failure to communicate. On the one hand, there’s the physician who’s looking for “evidence” that diabetes is being managed. That involves numbers such as HbA1c (a lab test that shows the average level of blood sugar over the previous 3 months; It shows how well patients are controlling their diabetes).

One could argue that BOTH sides have merit, but if HbA1c levels in type 1 diabetics are are not brought to normal levels, then the disease is not being “managed” no matter how much “emotional” support the patient receives from social media.

Some ePatient advocates recommend that pharmaceutical companies use Twitter to directly support patients seeking help regarding their Rx products (see, for example, “Use of Twitter for Patient Support” [free pdf]). Although nearly two-thirds of respondents to a 2009/2010 Pharma Marketing News survey thought that using Twitter for patient support activities would be somewhat or very effective, relatively few pharmaceutical companies are doing this on a regular basis. From time to time, however, it does happen (see “Supporting Patients via Twitter and Beyond“).

Social Media & Preventive Health Behavior
The American Heart Association recently published in the journal Circulation a “Scientific Statement” that recommends social networks — including online social networks — as part of an intervention strategy to prevent and manage childhood obesity (see “Approaches to the Prevention and Management of Childhood Obesity: The Role of Social Networks and the Use of Social Media and Related Electronic Technologies” attached to this post). “Research underscores strong associations between participation in social networks and preventive health behavior,” says the AHA statement.

Recent advances in technology provide new and emerging tools as interactive methods of intervention for the treatment and prevention of obesity. Nearly all (95%) adolescents 12 to 17 years of age have Internet access, and most are active in online social media. Internet-based programs and other electronic technologies have been used in both the treatment and prevention of overweight and obesity in youth. Benefits of the form of these interactive electronic interventions include their widespread availability in the school and home, popularity among youth, ability to engage and immerse participants, and ability to provide immediate tailored feedback. These technologies can also be used to provide specific content addressing healthy lifestyles with regard to diet and exercise. In addition, these technologies hold significant promise for application in the research setting because they are relatively inexpensive to scale up for broad implementation and can facilitate data collection.

Social Media and Knowledge Skills
Dr. Bronner’s study also aims to determine if social media can help diabetics “improve their knowledge skills and attitudes about their condition.” Sparling’s critique addresses the latter, but fails to say anything at all about the former; i.e., improving knowledge about diabetes.

I notice that there are a few dozen signers of Sparling’s “open letter.” Most of these are members of the “diabetes advocates” organization; i.e., people with diabetes. There is at least one pharma person who has also signed the letter and urged others to do so by (re)tweeting about it: Dennis Urbaniak (@Durbaniak).

Urbaniak, who is VP U.S. Diabetes at sanofi-aventis, was also quoted in the NPR piece about what his company has learned from type 1 diabetics on social media:

“In the past, the ads would always show the perfect blood sugar number, and the community says, ‘You know, that’s a bit insulting because it implies it is always easy to get this. Show a number that’s high or show a number that’s low. Make it real.’ And so this is the kind of feedback that’s been really helpful.”

Sanofi must also have learned that knowledge and education are also important social media deliverables for people with diabetes. That is why they launched “Diabetapedia,” the goal of which is “to help meet educational needs of diabetes community.” According to Laura Kolodjeski, Community Manager, Sanofi US diabetes, the overarching goal is to create “a single, comprehensive place where anyone can find and share definitions of diabetes-related terms and phrases” (listen to this podcast: “Diabetapedia: ‘Google’ for Diabetes“).

Dr. Bronner’s study is focused on one closed (by invitation only) social media community. If he was to look at Diabetapedia, I am sure he would find there is a lot more the site can do to “improve the knowledge skills” of people who use the site. Meanwhile, I have been running a little survey (here) to determine how sanofi can improve the usefulness of its Diabetapedia web site. Here is some preliminary results of that survey in a chart: 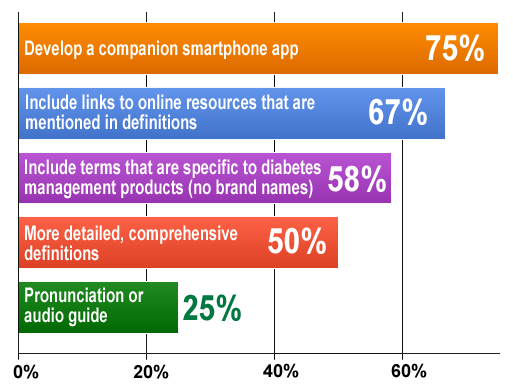 Social Media as it was Way Back When
Maybe some of these ideas will soon be implemented on Diabetapedia, but right now pharma-sponsored social media sites like this do not even equal the knowledge improvement skills that were available via Internet support groups as long ago as 1996. In support of that, I’ll give you one example based on my own experience with “DIABETES-EHLB,” an email-based discussion group for people with diabetes, diabetes educators, caregivers, and endocrinologists (for more background, read “Pharma ‘Social Networks’: Close But No Cigar Award“). It was sponsored by Hoechst Marion Roussel, a pharma company that later merged with other companies that eventually formed Sanofi-Aventis (funny how me and sanofi and its its predecessors have had relations going back to 1994.

Contrary to Urbaniak’s experience, members of DIABETES-EHLB often discussed “numbers” like HbA1c for managing their disease. Here’s an example of a web archive page found on the “way back machine:”

Responses included detailed information about HbA1c tests copied from government sites like the National Institutes of Health, highlights of presentations at an annual ADA conference, and advice for where to have the test done by mail. If you are interested in seeing these responses, click here (pdf).

As opposed to this, here’s what Diabetapedia says about A1c: 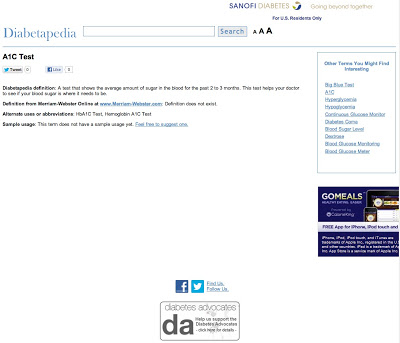 While it’s true that many people with diabetes might say “diabetes and all its related statistics don’t define me,” these numbers are something they need to understand and monitor if they want to manage their disease. Building “knowledge skills,” therefore, must be an important component of any social network claiming to help manage diseases like diabetes and obesity.

Multichannel Marketing: Easy to Brag About, but Difficult to Do