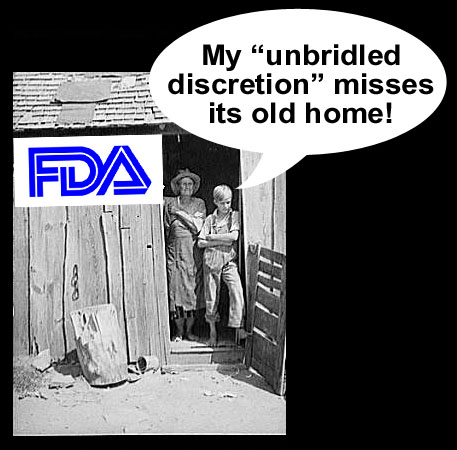 FDA has received several comments from the pharmaceutical industry regarding the agency’s “Draft Guidance for Industry Direct-to-Consumer Television Advertisements.” In this article, I review the comments submitted by PhRMA, Sanofi, and Shire. Comments from other pharma companies addressed similar issues to the ones reviewed here.

In a 20-page comment submitted to the FDA on May 14, 2012, the Pharmaceutical Research and Manufacturers of America (PhRMA), advised the FDA to “proceed cautiously and in a manner that fully protects the free speech rights of advertisers and patients” with regard to the agency’s recent Draft Guidance for Industry on Direct-to-Consumer (DTC) Television Advertisements.”

In its comments, PhRMA uses the word “cabin” as a verb, as in “clearly defined standards that cabin the reviewing official’s ‘unbridled discretion'” and “objective standards to cabin FDA’s discretion.”

Why does PhRMA want to banish FDA to a “cabin” in the woods as far it’s discretion to pre-review DTC ads is concerned?

PhRMA is itching to challenge FDA’s authority to regulate DTC advertising in front of the Supreme Court, which is cited several times in PhRMA’s comments. For example, PhRMA reminded the FDA (as if that was necessary) that the Supreme Court “recently affirmed that ‘[s]peech in aid of pharmaceutical marketing …. is a form of expression protected by the Free Speech Clause of the First Amendment.’ Thus,” says PhRMA, “when the FDA restricts the speech of pharmaceutical manufacturers and other regulated entities, the restrictions are subject to scrutiny under the First Amendment.”

But the Supreme Court Court is not likely to scrutinize “informal guidance,” which is not legally binding. Therefore, PhRMA is pushing the FDA to issue regulations, which carry the weight of law. “Regulations that unduly burden truthful, non-misleading commercial speech about a lawful product,” says PhRMA, “hinder consumer choice … and rarely survive constitutional scrutiny.”

Of course, FDA wants to prevent “misleading” drug ads from being aired. Right now, however, it can only cite ads as “misleading” AFTER they have already been aired.

I’m not going to delve into the legal arguments that PhRMA puts forth. You can read them yourself here. I just find it interesting that the drug industry is pushing FDA to stop issuing non-binding guidances in this case as well as in the case of social media (see “WLF & Pfizer Ask Court to Block FDA Guidance on Social Media“). I also like how PhRMA uses “cabin” as a verb, hence the cabin image that accompanies this post.

Hat Tip to @AlecGaffney for alerting me to the publication of PhRMA’s comments in the Federal Register, where “occasionally interesting reading [is] to be had.”
Sanofi Says Proposed FDA DTC Guidelines Would Effectively Kill TV Drug Ads
PhRMA is itching to challenge FDA’s authority to regulate DTC advertising in front of the Supreme Court, arguing that recent “Draft FDA Guidance on PreDissemination Review of TV Direct-to-Consumer Ads” (find it here) violates the Free Speech Clause of the First Amendment because pharmaceutical marketing is a form of free speech (see above).

Sanofi, on the other hand, in a comment submitted to FDA (see here) argues that “the process presented in the draft guidance would potentially require the sponsor [ie, Sanofi and other pharma companies] to cease the use of TV ads as a vehicle to educate consumers due to significant production challenges as a result of the draft proposed process.”

The “process” that Sanofi is talking about is the requirement to submit a “final recorded version [of the ad] in its entirety.” Sanofi is concerned that if the ad needs to be changed — reshot and re-edited — as a result of FDA pre-review, it be too costly and “resource intensive” for the sponsor.

Not all ads, however, will require FDA review before airing (see “Focus on Drug Safety Communication & TV DTC Advertising” for details) and it is not clear how much it would actually cost to redo the production to comply with FDA comments. Sanofi should have included some specific estimates of these costs and “resources” to bolster its case.

Sanofi offered a compromise. Instead of submitting a “final recorded version” of the TV ad “in its entirety,” Sanofi suggests that sponsors submit an “annotated storyboard or animatic [animated?] version of the advertisement.”

FDA already reviews storyboards submitted prior to ads being run. In at least one case, however, a violative ad was aired months after FDA had a storyboard in its possession. Only after the ad had run its course did the FDA issue a notice of violation (see “FDA and YAZ: Is FDA Helping Marketers Work Around Regulations?“).

Sanofi also submitted a comment regarding FDA’s requirement for “verification that a spokesperson who is represented as a real patient [in a TV ad] is indeed an actual patient.” Sanofi asked that FDA clarify what type of verification would be needed. Would a “signed testimonial from an actual patient” be enough?

Snaofi may be planning to use more real patients in its TV ads as have other pharma companies (eg, Pfizer use of real patients in Chantix TV ads). I’ve documented one instance where Sanofi has used a real patient in a video ad on YouTube (see “Method Acting for Real Patients Who Play Themselves on Pharma YouTube Channels“) but do not recall any TV ads for Sanofi products that used real patients.

Regardless of what verification FDA requires for TV ads, the guidelines only apply to TV ads and NOT to ads that run on YouTube. Hence, although these new guidelines may “kill” TV drug ads, they may be a boon for YouTube ads such as the Sanofi YouTube video mentioned above.
Shire Seeks to Maintain YouTube “Loophole” in FDA’s Draft Guidelines for TV Ads
Shire, like Sanofi, Novo Nordisk and Boehringer Ingelheim (BI), believes that submission of a final recorded version of a TV ad for FDA approval prior to being aired would be “burdensome.” Shire specifically cites the optional two-step process FDA suggested; i.e., first submit an annotated storyboard and then a final recorded version of the ad. “This sequential two-submission process would double the time and resource burden on sponsors as well as the Agency,” says Shire.

Serial OPDP Review Blues
BI also mentioned the “burden” of a two-step process in its comments to the FDA (find them here). But BI was referring to the need to resubmit a new version of the ad after receiving critical comments from the FDA concerning the first version submitted for review.

“BIPI is concerned with the incremental time and cost that would be incurred by sponsors to routinely produce and submit multiple broadcasts for the purpose of OPDP [FDA’s Office of Prescription Drug Promotion] pre-dissemination review,” says BI. “BIPI is similarly concerned that the repeated submissions of storyboards to capture serial sets of OPDP suggestions (i.e., the submission of modified storyboards for advisory comments following integration of initial advisory comments) would greatly increase the time, if not the cost, of producing DTC broadcast ads.”

BI says that it “behooves sponsors to ensure storyboards submitted for advisory comments are representative of the final ad and to ensure that the Agency’s comments are incorporated into the filmed version.” In other words, BI suggests FDA just look at storyboards and trust that the sponsor will create a final “filmed” ad that is revised according to FDA comments.

Shire, however, was the only pharma company to point out a “loophole” that I revealed on Pharma Marketing Blog in March (see “A Loophole (?) in New FDA Guidance on Pre-Dissemination Review of TV Direct-to-Consumer Ads“). In that post, I said:

“FDA does not define what exactly it means by ‘dissemination.’ Perhaps it has defined this term elsewhere in it regulatory archives, but I assume in this case it means airing the ad on mass market TV. Does that include uploading the video to YouTube? A drug company could upload a video of a pre-approved ad to YouTube at the same time that it submits the video to FDA for ‘pre-dissemination’ review. The video can then be embedded in the drug.com website or promoted via Twitter.”

Shire pointed out the same lack of clarity in its comments. “…there has been increasing availability and use of vehicles other than broadcast TV to present video advertising, such as on-demand viewing via the Internet,” says Shire. “Shire recommends that FDA affirm that the scope of the guidance includes only DTC advertisements disseminated through broadcast television.”

FDA and the drug industry continue to see no need to issue any mandatory or even voluntary guidelines specifically for drug promotion via the Internet. Shire points out, for example, that there already is an “advisory review process” that applies to video advertisements disseminated through “other viewing platforms’ (i.e., the Internet). That process (see here) says “a sponsor may voluntarily submit advertisements to FDA for comment prior to publication.”

However, if “dissemination” is defined according to Shire’s rules, then it is possible for a drug company to run a video ad on YouTube months before it airs the same ad on TV without having to submit anything to the FDA for review — the current “advisory review process” that Shire refers to is voluntary.

As part of that process (e.g., submission of static storyboards for video ads), FDA estimates that “approximately 2 hours on average would be needed per submission, including the time it takes to prepare, assemble, and copy the necessary information.” Compared to that, the creation of “final filmed” versions of TV ads is indeed a significant burden on sponsors. However, since FDA’s new guidelines are specifically aimed at products with significant safety concerns, it “behooves” the drug industry to carry that “burden” in the interest of patient safety, IMHO.

The iPad in the Doctor’s Office