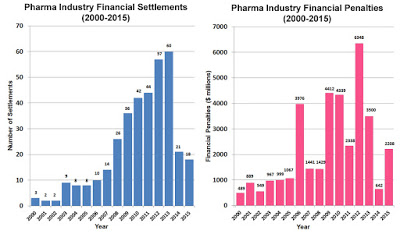 According to a Public Citizen report (here), stronger enforcement is needed to deter pharmaceutical manufacturers from continuing to break the law and defraud federal and state health programs. The report – an update to a previous study released in 2012 with additional data through 2015 – catalogues all major financial settlements and court judgments between pharmaceutical companies and federal and state governments from 1991 through 2015, which totaled $35.7 billion.

There is one surprising result.

Could it be that pharma marketers have become more compliant with FDA regulations because their MLR people became more assertive after many major pharma companies, which do a lot of drug marketing, were fined billions of dollars for inappropriately, and in some cases illegally, promoting prescription drugs?