For those of you who believe there’s no such thing as direct to consumer (DTC) “advertising” outside the US, let me offer this: “Lilly launches television campaign for ED awareness.”

Although this campaign is technically “direct to consumer” it does not qualify as “advertising” under European law because it is unbranded, which means that no drug trade name is mentioned and there is no direct inducement to buy a product. Such unbranded DTC disease awareness advertising is also common in the US (see, for example, Pfizer’s recent battered woman fibromyalgia disease awareness ad campaign described here).

The Lilly campaign, dubbed ’40over40′, is said to be “groundbreaking” being the “first time a UK-targeted campaign of this kind has appeared on British television.”

An integral part of the campaign is the 40over40.com Website, which claims “This site is designed to help you enjoy your love life again.” This site fits in with Lilly’s plan to “encourage sex between couples” (see “Look Out for Sexier Cialis Ads — Maybe Including Beaver!“). 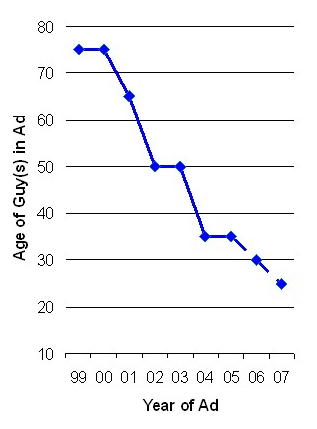 This whole notion that ED “affects” 40% of men over 40 is something I take issue with and have noted before as ED drug DTC ads in the US portrayed younger and younger men as sufferers of ED (see here). As the chart on the left shows, I saw this coming over 3 years ago.

According to 40over40: “Erectile Dysfunction (ED) is a common condition, 40% of men over 40 suffer from some degree of erection problem. If you are one of the 40% of men over 40 who also has experienced this problem you’re certainly not alone and you’ve arrived at the right site for reassurance and advice.”

The operative phrase is “some degree,” which is another one of those “subjective” phrases that can mean almost anything. What Lilly wants you to think, however, is that 40% of men over 40 suffer from ED, period! Not from rare or occasional problems getting an erection — not that there’s anything wrong with that!

A section of the 40over40.com site is about “ED treatment options,” which includes a table listing oral treatments, penile injections (ouch!), and vacuum pumps (hmmmm…). But due to EU laws banning DTC advertising, the site cannot mention oral treatments by name and must refer to them as “product 1,” “product 2,” and “product 3.”

Visitors are urged to talk to their doctors about treatment options — doc, I would like “product 1” please. Huh? I suppose Lilly sales reps can prep doctors so that they know that “product 1” = Cialis when UK guys come in and ask for it.

Soon, however, pharmaceutical companies in Europe may be able to distribute drug information such as Patient Information Leaflets (PILs) to consumers and 400ver40.com may be updated to allow UK guys to download a PIL about Cialis.

But remember that “news” article I linked to above entitled “Lilly launches television campaign for ED awareness”? That’s the PR Rosetta stone that allows UK consumers to decipher that “product 1” is really Cialis: the article tells us that Lilly markets Cialis and is also responsible for 40over40.com.

Who says there is no DTC advertising in Europe?

By Andrew Jack
[As reported in the London Financial Times]

Eli Lilly is to be reprimanded by the UK pharmaceutical industry watchdog for “unbalanced” promotion of its anti-erectile dysfunction drug Cialis, in violation of ethical rules.

The Prescription Medicines Code of Practice Authority has ruled that the US-based company “brought discredit” on the industry through a marketing campaign on television, the internet and in brochures in GP surgeries in the UK.

It said the company had presented information on its medicine that failed to cite the side-effects or risks, and in a way that would have encouraged patients to seek a prescription for Cialis.

The judgment, triggered by an FT article highlighting the campaign, is to be released shortly and has been accepted by Eli Lilly, which stopped using the criticised aspects of its campaign last month.

It concerned one of the most ambitious “disease awareness” campaigns so far conducted in the UK, funded by Eli Lilly as the manufacturer of Cialis. The “40 over 40” campaign claimed that 40 per cent of men aged over 40 had problems with erectile dysfunction, and provided treatment options, listed without the brand names on its website but including them in a brochure distributed for doctors’ waiting rooms.