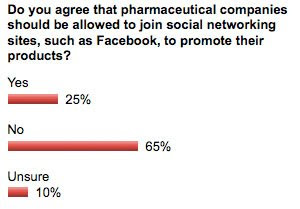 Psychiatric Times (PT), “the forum for the voice of psychiatry,” is currently running a poll on its home page that asks readers a simple question:

“Do you agree that pharmaceutical companies should be allowed to join social networking sites, such as Facebook, to promote their products?”

Although there are not enough votes cast to make this significant, I am interested in following this poll as time goes on to see if the numbers change. You can find the poll here.

The readers of PT are predominantly psychiatrists (88% of approx. 39,000 subscribers), a group of physicians that up until now have received a lot of money from pharmaceutical companies to help promote new “medical conditions” such as “PGAD” (see “PGAD. EGAD! Another Syndrome/Disorder, Whatever!“). I assume the majority of poll respondents are psychiatrists too.

Of course, this poll allows respondents a great deal of latitude in interpreting the phrase “promote their products.” Does this mean placing an ad in the right-hand column of targeted Facebook pages just like every other advertiser does? Does it mean Facebook pages devoted to products created by pharma marketers? Or does it mean pharma marketers posing as patients and posting comments praising products? I would say “No” to the latter, and say “Yes” to the first two. But I didn’t have that option. Thus, I was among the 10% who were “Unsure.”

And, there is no way of confirming that the majority of respondents are actually psychiatrists, especially now that I am promoting this poll here on Pharma Marketing Blog!

So, I’m sorry about the misleading title of this post. But it would be interesting to know what physicians (and patents) think of pharmaceutical companies engaging in their social networks. Yes, I know that Sermo polled its physician members and claimed that “more than 50% of

Loading ...
respondents were in favor of having some kind of interaction with the industry” (see “Sermo CEO Talks About Pfizer Collaboration” and “Collaborating with Online Physician Communities“). That result, however, was based on only 89 responses — a self-selected group of less than 0.3% of all Sermo members. According to Daniel Palestrant, M.D., founder and CEO of Sermo, the site also did “extensive focus grouping” to gauge their members’ preferences.

So as not to let a good opportunity to ask your opinion go to waste, I developed the How Should Pharma Engage in Patient/Physician Social Networks? Survey, which I hope you will respond to now.