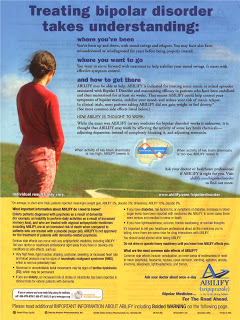 The saga of the Andy Behrman, the patient that Bristol-Myers Squibb (BMS) paid hundreds of thousands of dollars (but balked at paying him millions) to help promote its drug Abilify, continues.

[Note: After writing this post, Xavier Petit (@xpetit) of Shire posted a tweet from an industry conference that relates lack of adherence to lack of transparency about a drug’s side effects, one of the main reasons people stop taking their prescribed medicines. Xavier said: “what can we do [to improve adherence]? Don’t downplay side effects: remind docs about strategies for addressing side effects,” which is precisely what I am saying in this post if you read the commentary at the end.

My thesis is: using patient advocates like Andy Behrman, who obviously was not “reminded” about Abilify’s side effects by his BMS handlers, downplays side effects and does not improve adherence.

While Behrman was being paid by BMS, he was happy to focus on Abilify’s benefits. Now that he is no longer on BMS’s payroll, he is equally happy to talk about the side effects. It all suits his purpose. I contend that many other paid patient (and celebrity) advocates would do the same.

The danger is magnified 10X when paid patient advocates use social networks to promote drugs. In many cases, other members of the community would be unaware that the person speaking about the drug is being paid by a pharmaceutical company. Imagine if Behrman posted messages about Abilify on social networks! He may have done so on his own in order to please his BMS patrons.]

Jim Edwards of BNET Pharma reports that Behrman has resorted to an e-mail campaign that Edwards says is a “long plug” for Behrman’s new book (see “Andy Behrman Resorts to Spam in Fight vs. BMS and Abilify“).

In reading Behrman’s e-mail message I found a link to a 60-second anti-Abilify video ad he posted to YouTube (“Abilify Kills”; see below). This “anti-ad” lists several of the side effects of Abilify and finishes with a twist on the famous “Ask Your Doctor” closing found in all DTC Rx drug ads: “Ask your doctor if Abilify is wrong for you.”

Now that Mr. Behrman is getting so much media attention and is going viral on the Internet (he asked the 3,000+ recipients of his e-mail “to forward this e-mail to everyone you know”) and YouTube, Abilify’s long list of dangerous side effects is being put in the spotlight.

To be sure, these side effects have always been available for everyone to see in Abilify ads (such as the one on the left; click for an enlarged view) or on the Abilify Web site.

However, in the print ads, the side effects are in small type at the bottom of the ad, whereas the benefits are at the top and within the pleasant image area of the ad — where your eye is naturally drawn.

On the website, the laundry list of side effects is even harder to read — very small typeface — and mostly below the “fold” where it is less likely to be seen at all.

Mr. Behrman’s “anti-ad” may have been more dramatic if the side effects were presented as text scrolling down the screen silently, in a black box. Here’s what that might look like like (please scroll to the end where you find more of my commentary):

Elderly people with psychosis related to dementia (for example, an inability to perform daily activities as a result of increased memory loss), treated with antipsychotic medicines including ABILIFY, are at an increased risk of death compared to placebo. ABILIFY is not approved for the treatment of people with dementia-related psychosis (see Boxed WARNING).

Antidepressants may increase suicidal thoughts or behaviors in some children, teenagers, and young adults, especially within the first few months of treatment or when the dose is changed. Depression and other serious mental illnesses are themselves associated with an increase in the risk of suicide. Patients on antidepressants and their families or caregivers should watch for new or worsening depression symptoms, unusual changes in behavior, or thoughts of suicide. Such symptoms should be reported to the patient’s healthcare professional right away, especially if they are severe or occur suddenly. ABILIFY is not approved for use in pediatric patients with depression (see Boxed WARNING).

Contraindication: Patients should not use ABILIFY if they are allergic to aripiprazole or any of the ingredients in ABILIFY. Allergic reactions have ranged from rash, hives and itching to anaphylaxis, which may include difficulty breathing, tightness in the chest, swelling of the mouth, face, lips, or tongue.

Serious side effects may include:

* Very high fever, rigid muscles, shaking, confusion, sweating, or increased heart rate and blood pressure. These may be signs of a condition called neuroleptic malignant syndrome (NMS), a rare but serious side effect which could be fatal

* Abnormal or uncontrollable movements of face, tongue, or other parts of body. These may be signs of a serious condition called tardive dyskinesia (TD), which may be permanent

* If you have diabetes, or risk factors for diabetes (for example, obesity, family history of diabetes), or unexpected increases in thirst, urination, or hunger, your blood sugar should be monitored. Increases in blood sugar levels (hyperglycemia), in some cases serious and associated with coma or death, have been reported in patients taking ABILIFY and medicines like it

Lightheadedness or faintness caused by a sudden change in heart rate and blood pressure when rising quickly from a sitting or lying position (orthostatic hypotension) has been reported with ABILIFY.

ABILIFY and medicines like it can affect your judgment, thinking, or motor skills. You should not drive or operate hazardous machinery until you know how ABILIFY affects you.

Medicines like ABILIFY can impact your body’s ability to reduce body temperature; you should avoid overheating and dehydration.

Tell your healthcare professional if you have a history of or are at risk for seizures, or are pregnant or intend to become pregnant, and about all prescription and non-prescription medicines you are taking or plan to take, since there are some risks for drug interactions.

Most common side effects (≥10%) from all clinical trials involving adults or pediatric patients include:

It is important to contact your healthcare professional if you experience prolonged, abnormal muscle spasm or contraction which may be signs of a condition called dystonia.

With such a long list of serious side effects, one has to wonder if it is appropriate for BMS to have hired or continue to hire patient spokespeople who may not be aware of these side effects because they have not “asked their doctor if Abilify is wrong for them.”

Personally, I do not think patients — whether they have been paid or not are good sources of information — about dangerous drugs, especially those like Abilify, which contain FDA-mandated black box warnings.

Let’s Put Social Media to One Side
And this brings me to social media and the dangers that may be lurking there for patients seeking information about drugs.

A well-known Vice President at a Top 10 Pharma company recently spoke to blogger Ged Moore over the phone. Among other things, this VP said: “”Ged, patients think they have gained the upper hand in knowledge about medicine. They come to the doctors with more informed choices about drugs, dosage etc. But this doesn’t mean s**t…we need to re-engage with the physician; let’s put the social media stuff to one side. The physician is the most important person in this whole equation. We need to make sure our communication is clear to the physician and they relay to the patient in a clear way” (see “What a VP said to me….“).

Although the VP was talking about adherence — “look at our adherence rates, they are just as low as ever” — he could just as well have been talking about side effects that may not be mentioned in consumer-generated content on social media sites and that are de-emphasized on drug information websites.

The VP says: “It’s madness, we as an industry need to make sure clear, transparent information is there.” Unfortunately, again, he/she was not talking about being transparent about side effects.

Thank you Andy Behrman for leading me to this topic of discussion, which I hope will continue.