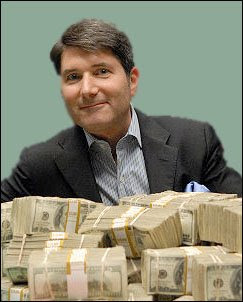 Andy Behrman — aka “Electroboy” — is being raked over the coals for first shilling for BMS’ drug Abilify (for which BMS paid him $400,000), then “shaking down” BMS for a new contract and then launching an anti-Abilify campaign when he didn’t get it (see “Andy Behrman, Now an Anti-BMS Spokesperson, Says ‘Ask Your Doctor If Abilify is Wrong for You’“).

* Is it appropriate for pharma companies to pay patients such huge sums to promote their products?

* Is this done often by all pharmaceutical companies or is it just something unique to BMS?

To answer these questions, I will relate a personal story where I was involved with another patient paid huge sums of money by BMS to advocate another product: an anticholesterol drug.

Way back in 1994, I launched a drug information Web site called PharmInfoNet. It was a popular site and we worked with many pharmaceutical companies that placed ads on the site and that provided funding for physician education programs (we summarized presentations made at medical conferences and published them on the site).

I was often contacted by entrepreneurs who wanted to work with us to develop and promote their own websites. One day a young guy — let’s call him Wayne — called and said he wanted to launch a site related to cardiovascular health and wanted me to help, maybe be a partner.

Wayne had a heart attack not long before he contacted me — he was maybe 30 years old at that time. It was nearly fatal. After his recovery, Wayne’s physician (let’s call him Dr. Raider), a key opinion leader paid by BMS, prescribed a BMS anti-cholesterol drug for Wayne.

When I first met Wayne, he told me about how he was hired by BMS to be a spokesperson — along with Dr. Raider — for BMS’ drug. Wayne was featured on patient brochures and went around speaking about his experience to wherever BMS sent him.

Although Wayne never told me how much he was paid by BMS, I knew it was serious money because he had a lawyer and was spending a lot to build his Website. The site also received major financial support from BMS. At the time, I did not think it was inappropriate for BMS to pay Wayne to be a spokesperson. Kudos to him!, I thought.

Wayne and I were partners for a time — we exchanged links and content between our sites. Eventually, we both sold our websites to another company and went our separate ways.

I cite this story as anecdotal evidence that “Electroboy” was not the first patient BMS paid to promote a product. Wayne had not even been a famous author when he was paid by BMS to promote its product. I suspect that even today, other non-celebrity patients are being paid by BMS.

Is it just BMS doing this? Or are other drug companies also paying patients to “tell their stories?”

My fellow blogger, Wendy Blackburn, suggests this is a common practice. She wrote in her post “In Defense of Pharma and Patient Spokespeople“:

“There are plenty of pharma companies that handle patient relationships responsibly, plenty of patients that behave ethically, and thousands of people who have benefited from other patients sharing their stories in meaningful ways. And of course the WSJ chose NOT to focus on them. In my experience companies are extremely conservative, careful and ethical with these relationships. Patients speak in their own voice and are treated with respect. Yes, their words are edited. But honestly most of the editing-out is of the overly positive (‘this drug saved my life’ or ‘I felt better immediately’), always striving for a more typical and balanced representation.”

I also believe that people benefit from hearing other patients’ stories and, as Wendy points out, that’s what makes social networks so useful for patients. However, when some patients are paid huge sums of money by drug companies to “speak in their own voice,” I suspect that this “voice” is not authentic and most often there is a lack of transparency about who pays for the “voice.”

Patients want and need to hear “voices” without the slightest chance of bias. Given the odds that this can happen when the voice is paid for, it becomes necessary to ensure transparency. But even transparency is NOT enough. Drug companies simply should NOT pay for these voices. They should certainly not pay hundreds of thousands of dollars!

If pharma really wishes to engage in social media, they need to find voices that are already partial to their products and support them WITHOUT direct payment.

Here’s an idea: Instead of handing bundles of money to patient spokespeople, drug companies can donate the money to the patient’s favorite charity — preferably one not set up by the patient (Wayne and his lawyer had set up such an organization through which BMS funneled him his cash).