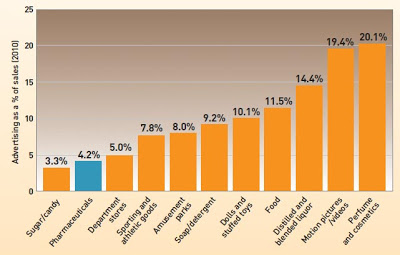 The pharmaceutical industry is fighting a losing battle (IMHO) against negative public opinion. The latest weapon to be employed in this battle is a 52-page “booklet” entitled “The Value of Medicine, Improving Health…Improving Life” published by Eli Lilly (find pdf here).

A 52-page PDF document is a bit much to ask the average consumer to digest even with all the pretty charts and graphs with circles and arrows and paragraphs explaining what each chart is about.

Also, I must say that Lilly engages in some “misinformation” itself, or at least conflicting information (keep reading to see what I mean).

It’s all very well to blame the so-called “era of mistrust and misinformation” for pharma’s failure to win over the hearts and minds of consumers, but we all know some of the blame falls squarely on pharma’s shoulders. It’s unfortunate, for example, that this booklet comes out around the same time that AP reported “pharmaceutical companies made up eight of the government’s top 10 settlements related to fraud in the last year” (see “Drugmakers top list of DOJ fraud settlements“).

But enough about fraud, let’s talk about Lilly’s defense of DTC (direct-to-consumer) advertising, which is presented in pages 32 to 36 of the booklet.

First, let me say that it’s ironic that an industry that spends so much money, time, and effort to produce DTC ads — including wonderfully creative TV commercials — to “educate” consumers, relies on pdf files and web sites to defend its products, advertising tactics, and public image. Where’s the TV ads? If, as Lilly claims, 30 to 60 second TV ads are so effective in educating consumers about “diseases, about the symptoms that may help their health care provider identify the diseases, and about available therapies to treat these conditions,” then why not use TV ads to provide “answers that matter” about “tough questions about access, costs, safety, and ultimately the value that we can bring to patients in preventing and fighting disease” (quoting John C. Lechleiter, PhD, Chief Executive Officer and President, Eli Lilly and Company)?

It can’t be that TV ads are too expensive. Lilly claims that the drug industry’s spending on DTC advertising (about 65% of which goes to TV) “represents only about 2% of pharmaceutical company sales.” BTW, Lilly doesn’t mention the $ amount of sales, but it does mention that DTC spending is about $4.4 Bn per year. If you do the math — something most consumers I regret will not or cannot do — you get $220 Bn per year for the sales number. I think Lilly is selling itself short here. I find from IMS data that US drug sales in 2009 was more like $300 Bn. Ergo, DTC spending is only 1.4667% of sales. Perhaps Lilly was rounding up — but it could have rounded down to 1%! Whatever.

Lilly also presents a nice chart to illustrate the point that the pharmaceutical industry “spends less on advertising as a percent of sales than many other industries” (see chart below). Of course, by “less” Lilly really means on a percentage basis. The sporting and athletics goods industry spends MUCH more than pharma on advertising (as a percentage of sales), but not so much more on a dollar basis ($5.6 Bn vs pharma’s $4.4 Bn).

According to this chart, pharma advertising spending is 4.2% of sales. How come the discrepancy between this % and the 2% Lilly quoted on the page before the chart? Could it be that this chart includes “advertising” to doctors as well as DTC? Lilly does NOT mention how much the drug industry spends on “marketing” to doctors, but I’ve seen an estimate of $12 Bn per year for that (see here). But $12 Bn + $4.4 Bn = $16.4 Bn, which is 5.4% of $300 Bn in sales (as reported by IMS) or 7.4% of $220 Bn in sales (as calculated from Lilly’s figures).

OK, so the numbers don’t jive. I’ve notice that’s often the case when analyzing data about the pharmaceutical industry. I’m used to it. Just another form of “misinformation.”

Aside from touting how economical drug companies are regarding advertising, Lilly also claims that “limiting prescription drug promotion may negatively affect patients and health care providers by restricting access to important information about diseases and proper medical treatment. Also, consumers may not as easily receive information about the benefits and risks of prescription medicines.”

I can write a whole book in response to that! Let me just say, that in this day and age of Internet technology, which Lilly does not seem to be part of, DTC advertising is an insignificant source of “information about diseases and proper medical treatment” for consumers and physicians alike. Does Lilly really expect us to believe that limiting DTC advertising will negatively affect patients and healthcare providers?

OK. I’ve spent enough time on this. I assume all of you will download this 52-page booklet and read it from cover to cover. Actually, there are a lot of pictures, so don’t worry, you should be able to read the whole thing in about 20-30 minutes or so. Let me know what you think.