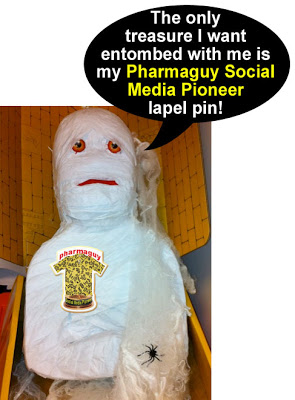 Just today, Shwen received this mummy on his doorstep from an anonymous source. Needless to say, he’s pretty confused. Who would send him such a thing? Perhaps it was an old mummified Web 1.0 pharma pioneer? We may never know.

Shwen leads Digital Strategy and Social Media within the Marketing department at Vertex Pharmaceuticals where I am sure he is playing a major role in educating his colleagues and preparing for the day when his company may launch a social media initiative.

How can someone who has not yet actually been involved in a pharma company social media project receive such a coveted award? Well, first of all, Shwen may actually be working on such a project within Vertex but not talking about it*. More importantly, he is everywhere that social media is discussed within pharmaceutical and healthcare circles.

Like one of the original seven U.S. astronauts, who may not have traveled in space, Shwen is training those who will be there someday and may yet be called to duty himself. So stop trying to scare him, whoever you are!

*Vertex may soon get approval for a blockbuster Hepatitis C “cure” (see “New Hepatitis C Drugs May Be Blockbusters“). Four million Americans may have Hepatitis C and as many as 3 million of them don’t know it. This is ripe territory for a social media campaign focused on a population of younger people that includes celebrities.

CORRECTION: Shwen tells me that “most prevalent pop for HCV is baby boomers” like me. Even better I would say. According to Deloitte data, 2009 was the year that social media bloomed for Baby Boomers, with nearly 47% of them actively maintaining a profile on the social web, which is up 15% from 2008 (see “Baby Boomers and Seniors Are Flocking to Facebook“).

Purple Haze: How the Purple Pill is Fighting Maine on Cheap...