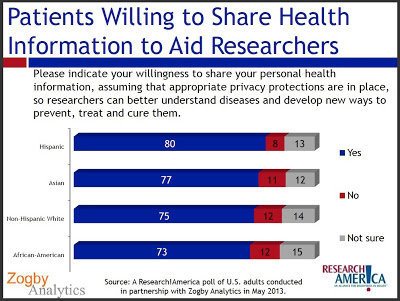 I read with interest the piece “A Matter Of Trust: Minorities Are Suspicious Of Clinical Trials” by Ed Silverman, author of Pharmalot blog. The post summarized key points of a Research!America poll of U.S. adults conducted in May 2013.

“A key issue is a lack of trust,” noted Silverman. He was probably referring to a chart on page 8 of the survey report (find it here). This chart plotted the percentage of respondents — broken down into racial categories — who said “lack of trust” was a reason individuals do not participate in clinical trials. From the looks of this chart, it appears that African-Americans are very much more distrustful of clinical trials than ALL other ethnic groups.

The Research!America bar chart is misleading because it employs a trick often used to exaggerate the difference in data points: it does not label the X-axis and I suspect the scale does not start at 0. This makes the African-American data bar look much bigger than all the others.

To test my hypothesis, I replotted the data and created the following montage comparing my plot (at bottom) with the Research!America plot (at the top): 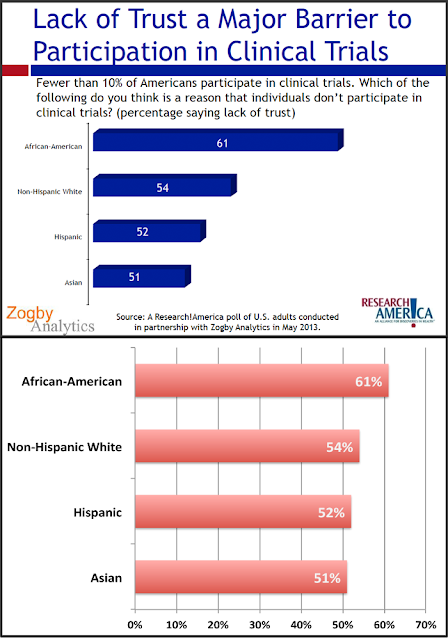 Silverman backtracks and says “lack of trust… runs rather high among many Americans, regardless of race.” That being the case, he should change the title of his post.

Numbers and statistics aside, this survey does address an issue of concern — namely, the difficulty that pharma companies have in recruiting patients to participate in clinical trials even though according to this poll a majority of Americans believe that having the opportunity to improve the health of others is a very or somewhat important factor in a decision to participate as a volunteer in a clinical trial.

Another interesting insight from this poll is the fact that the vast majority (73% to 80%) of patients are willing to share their personal health information to aid researchers, assuming “appropriate privacy protections” are in place (see chart below):

Recently it was learned from the release of a secret memo that the Pharmaceutical Research and Manufacturers of America (PhRMA) and the European Federation of Pharmaceutical Industries and Associations (EFPIA) are soliciting patients to limit the release of clinical trial data (see here). The industry (PhRMA) argues that “releases of patient-level data must take into account informed consent and patients who volunteered in earlier clinical trials may have not consented to such release” (see here). In other words, it all comes down to having “appropriate privacy protections” in place, whatever that means.