Subtitle: This Bayer Sexy Youtube Video is Popular, but Will It Help Levitra Sales?

Is viral, peer-to-peer pharma marketing an effective tactic? Jeff Chester, who heads up the Center for Digital Democracy (CDD), thinks so. Speaking on NPR’s All Things Considered show (summarized on NPR’s blog), Chester commented on Bayer’s funny “InBedStory” series of YouTube videos and claimed that “the drug company marketers are counting on you to forward the funny video. And,” he says, “that’s the idea behind all these techniques.”

By “all these techniques,” Chester includes techniques like the infamous Novartis Share button that recently was dinged by FDA (see “Implications of FDA’s Warning Letter to Novartis Regarding Facebook Share Widget” and “Who’s in Charge of Your ‘Invisible’ Metadata? WARNING: Don’t Invoke the ‘Invisibility Rule’“).

First of all, there was nothing “funny” about the Novartis button, which included this message: “Home – Tasigna (nilotinib) 200 mg capsules.” I can’t imagine a more uninspiring, absolutely non-viral message! Why would I bother to share that unless I was working for Novartis?

Ah! I think I really hit upon pharma’s viral social media strategy — get your agents, acting like real patients, to spread the word. By agents I mean ad and pr agencies who hire ordinary people to do the dirty work. I believe that this is happening (see “Professional ‘Hired Gun’ Pharma Tweeters. Is It a Good Idea?“).

But Chester’s point was that funny, sexy stuff like Bayer’s InBedStory videos are popular and easily spread far and wide by ordinary Joes like me. Well, not like me. I am not among the “one in four men” who have ED, which is a claim made in one of Bayer’s videos; in another video, the male character claims that “maybe there’s a whole army of men out there needing to put more balls into the cannon, so to speak” (BTW, I have issue with these exaggerated ED prevalence claims; see “40over40: Lilly’s DTC ED Awareness Campaign in the UK“).

The funny thing is, Bayer has shut down practically ALL of the social media, viral functions on its InBedStory Youtube channel. You can’t submit comments and you can’t embed any of the videos in blogs like this one. So I can’t embed Episode #9 (“Sex Tape”), which is by the far the MOST popular video in the series, in this post. But here’s a scene from it, which you can click on to get to the Youtube site. 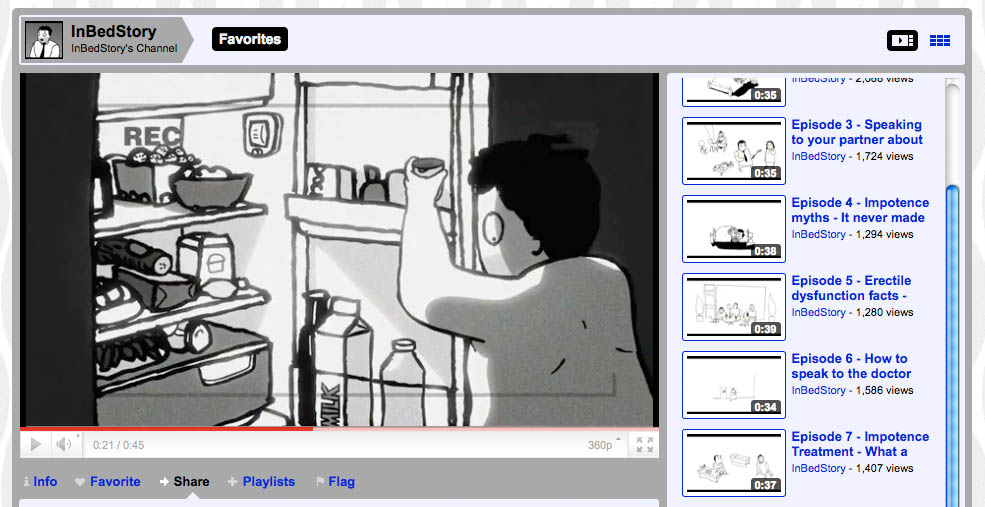 I should mention that you can “Share” InBedStory videos by distributing links to them in Twitter, Blogger, email messages, etc. I guess that counts as viral. It seems, however, that not many people are doing this EXCEPT for the “Sex Tape” video, which has been viewed more than 126,000 times! This video really has no message other than hinting at various ways of having kinky sex (go ahead, have a look!) All the other videos, which are at least educational and have the message to go talk to your doctor, have been viewed only about 1,000 times — less than 1% of the views racked up by “Sex Tape.” In contrast, “Macks’ Osso bucco recipe” Youtube video has over 1,100 views (see embedded version at the end of this post).

BTW, there’s also an InBed web site. “See one man’s journey from droop to Don Juan” is how the site describes the series of videos. You can “Share This Site,” but not by using any nifty social media tool — you just enter some one’s name and email address and Bayer sends them a message like this: “Hi, John Mack sends you the following recommendation http://www.in-bed.info/en/index.php” which is pretty enticing. NOT! I spent all morning entering email  addresses of everyone I know and I hope they will do the same. Yeah for the latest in viral marketing!

Curiously, the InBed website does NOT include Episode #9 (“Sex Tape”), which is the most viral of all videos in the series!

Even if Bayer allowed viewers to comment on and embed its videos, I doubt that it would help the sales of Levitra. The whole effort is UNBRANDED, except for the Levitra flame logo off to the right of the screen. You’d have to be pretty savvy to know that Bayer markets Levitra. The fact is, these videos may get more men to ask their doctors about ED treatments, but it’s likely that the doctor will prescribe Viagra, the number one ED drug, and NOT Levitra (#3 in most markets).

But getting men to see their doctors about their erectile dysfunction problems is a good thing whether it sells more Levitra or not. Maybe some of these men have real underlying, untreated medical problems such as diabetes or hypertension that is causing ED. Unfortunately, only one of the 9 InBed videos I viewed mentioned possible underlying medical conditions (ie, high blood pressure).

So, the most viral aspect of InBedStory (video #9) is the least effective in promulgating Bayer’s cause (get men to see their doctors about ED) and is the least promoted video on the official website. This hardly seems like a case in support of Chester’s contention that pharmaceutical marketers are “counting” on the viral nature of social media to spread their drug messages.