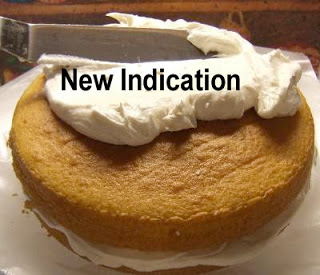 One new indication for pain = $500 Million in additional sales!

Once a drug is developed for a single indication, gaining approval for additional indications can be sweet icing on the profit cake.

As an example, take Cymbalta, which was originally approved in 2004 for adults with major depression. Later the FDA granted Lilly, the company that manufactures Cymbalta, approval to market Cymbalta for treating nerve pain in diabetics, GAD (ie, “generalized anxiety disorder”; see “eGAD! How I Learned to Stop Worrying and Love Cymbalta!“) and fibromyalgia, a condition characterized by chronic fatigue and muscle and joint pain.

Now, as reported in this Bloomberg article (“Lilly’s Cymbalta Helps Chronic Pain in U.S. Review“), Cymbalta may be approved for chronic lower back and knee pain, an indication that would increase sales by $500 Million, a 16% increase over the $3.07 Bn in sales for Cymbalta in 2009.

Currently, it is estimated that 7% (about $215 Million) of Cymbalta sales comes from “off-label” prescribing for “diseases of the musculoskeletal system, including arthritis and back pain.” No doubt this is due in part to stories published two years ago with these headlines:

For more on that, see “The Cymbalta Buzz Machine is at Full Throttle!”

Getting a 7% in sales from off-label prescribing is sweet, but sweeter still is getting an additional 17% from being able to market the drug for a new indication.

This got me to thinking about how much it costs to get a drug approved for a new indication. First of all, it has to be lot less expensive than getting the first indication because no new safety trials have to be run. Of course, new efficacy trials have to be run to “prove” that the drug works to treat the new condition. But these trials are much smaller — hundreds of patients — compared to the initial trials that involved thousands of patients.

As I learned when I wrote “The Cymbalta Buzz Machine is at Full Throttle!” the the back pain study, which Lilly may have submitted to the FDA to support Cymbalta’s use for chronic pain, involved ONLY 236 patients. That’s a pretty small study compared to the size of clinical trials needed for initial approval of a drug for marketing.

Searching Google, I found the cost per patient of running a clinical trial to range from $5,000 to $26,000. I suspect the former number is closer to what Lilly paid for its back pain trial. That would mean that Lilly paid only $1.3 Million to run this trial, for which it stands to gain $500 Million in additional sales.