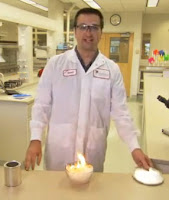 This is Robert Kernstock, Principal Scientist at Astellas Pharma US. I was alerted to meet Robert and “learn why he LOVES science & who inspired him” by @AstellasUS, the company’s Twitter account.

I immediately recognized Robert from a video he made that teaches kids how to light ice on fire. That video was the highlight of a conference I attended last year. That’s Robert and his fiery ice on the left. I embedded the video below.

The Astellas YouTube channel (here) showcases several of its scientists as part of the company’s Science WoRx (get it? ie, “Rx” for prescription) project, which is a local mentoring program and online resource network for science teachers.

I think this is an interesting program because it shows us some of the real people who work in the pharmaceutical industry and how they got there. Robert became interested in chemistry because his father was a chemist and worked for Dow Chemical and he admired his chemistry teacher in school.

[Personal aside: I recall that Dow Chemical produced deadly napalm and agent orange during the Vietnam War in the 60s and was responsible for the 1984 Bhopal (India) disaster, one of the world’s worst industrial catastrophe due to a leak of methyl isocyanate. Obviously Dow Chemical also produces some great products that make life easier. In the balance of things, however, I’d much rather be like Robert and work for Astellas than like his father who worked at Dow. Robert says he had a “particular passion” which is “to help people. I wanted to cure diseases,” said Robert (see his interview here).]

Astellas says “We encourage you to leave comments here. However, we will review all comments and will remove any that are inappropriate or offensive. Please understand that comments posted to this channel do not necessarily represent the opinions of Astellas Pharma US, Inc.”

I guess Astellas has not received any comments or it finds all comments that were submitted — I think I submitted one a while back — inappropriate or offensive because I can’t find any comments at all. That’s a shame because it would be neat to have some kind of conversation with scientists like Robert or at least send them comments to say how much we enjoyed seeing ice on fire!

P.S. Astellas says “We understand that the future of innovation lies in our children and that a child’s interest in science is sparked in the classroom,” says Astellas. “We also recognize that America’s science teachers are key in igniting this spark and that it’s their commitment that compels a child’s desire to pursue their interest further. In fact, many of our own employees attribute their passion for science to dedicated science educators like you.”

It’s too bad that state governments currently under Republican rule like Wisconsin and Pennsylvania are drastically cutting funds to education and undermining the teachers that Astellas and other pharmaceutical companies depend upon to get future scientists on their payrolls. I think the drug industry needs to step forward FINANCIALLY to fill some of the void being created by draconian budget cuts. That’s my opinion at least.

Whoah — this ice is on fire! Learn how this “cool” reaction works with Science Pro Robert. Kids of all ages will get a kick out of this, but adult supervision is definitely required in this experiment! Please remember to wear all Personal Protective Equipment (PPE). Incorporate this flashy experiment into your next class by requesting a companion lesson plan from science.worx@us.astellas.com!