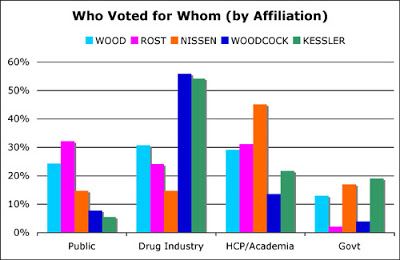 By now you all know about FDA’s decision to put restrictions on how physicians prescribe Avandia in the US (see “FDA will significantly restrict the use of the diabetes drug Avandia“). European regulators, however, chose to completely ban the sale of Avandia.

Why the difference in approach between two regulatory agencies whose decisions were announced simultaneously in what has been described as “an unusual degree of coordination” (see WSJ article “FDA Restrictions on Avandia Will Lead to ‘Minimal’ Sales“)?

The WSJ tells us the answer: “By keeping the drug on the market with restrictions, FDA Commissioner Margaret Hamburg gave a nod to a powerful internal faction led by drug chief Janet Woodcock, who maintained for years that the evidence against Avandia wasn’t conclusive,” noted the Wall Street Journal. “Dr. Woodcock noted the divisions Thursday, saying FDA scientists couldn’t agree on how to weigh the evidence of Avandia’s risk, resulting in ‘different conclusions.'”

IMHO, it looks like Janet Woodcock is keeping on the good side of the drug industry, which is now donating large sums of money to the GOP in the hopes of defeating Obama in the 2012 presidential elections. If that happens, it is unlikely that Margaret Hamburg will remain on as FDA Commissioner and the one person remaining who has the backing of the drug industry is Janet Woodcock.

I learned about pharma’s support of Woodcock during and after the 2008 elections, when I hosted a survey that tried to determine who among the likely candidates at the time would be nominated by Obama as the next FDA Commissioner (see “Meet the Person Likely to be the Next FDA Commissioner“).

[It’s interesting to note that several of the candidates for FDA Commissioner in 2008 have been involved in the controversy over Avandia and were mentioned in the Wall Street Journal article; namely, Janet Woodcock, Dr. Steven Nissen, former FDA Commissioner David Kessler, and current FDA Deputy Commissioner Joshua Sharfstein.]

While Hamburg was hardly mentioned as a contender for commissioner in 2008, Janet Woodcock was and she received 11% of the votes from US respondents overall in my survey. However, Woodcock received 56% of the vote of respondents who said they were employed by pharmaceutical companies (see chart below, click for enlarged view).

David Kessler — not known as a friend of the drug industry — also received a majority of pharma respondents’ votes, which is something I am at a loss to explain.

Of course, this survey of over 450 people should not be considered “scientific.” Similarly, according to Woodcock, the meta data results upon which Avandia’s cardiovascular risk was pegged are also not scientifically “robust or consistent.” “We still feel there’s considerable uncertainty about the magnitude and existence” of the risk,” said Woodcock.

It’s clear that if Janet Woodcock were FDA Commissioner, the fate of Avandia would have been very different. But there’s still hope! The fact that Avandia remains on the market means that the reports of its demise may be a bit premature. First, GSK, which markets Avandia, can still supply the FDA with data from its RECORD study that proves the cardiovascular risk of Avandia is not substantial. Second, FDA’s actions can be reversed if there is a new regime at FDA after the 2012 elections. The person most likely to head such a new regime is Janet Woodcock.