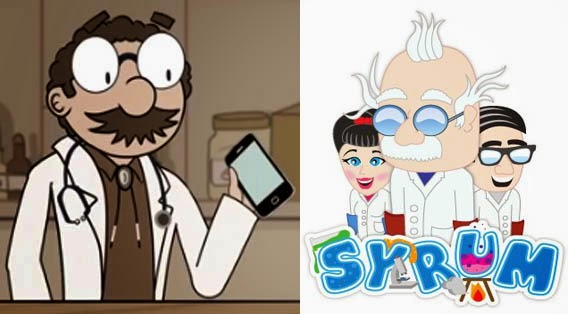 There is no more cherished and insulting image of a scientist/researcher than the “mad scientist” persona often depicted in cartoons.

A case in point is “Professor SYRUM” from Boehringer’s EU-only Facebook game of the same name (see “Happy Holidays from Professor Syrum“). That’s him on the near left.

Recently, I became acquainted with an unnamed scientist (physician? pharmacist?) in an animated piece produced by IMS Health to promote its new mobile health app review program (see “Is IMS Health’s Mobile Health App ‘Certification’ Program Doomed to #FAIL?“). That’s him on the far left of the image shown above. Let’s call him “Doctor IMS.”

Do you see the similarities between Professor SYRUM and Doctor IMS? Read on to learn my theory about how they are related.

My theory is this: Doctor IMS is Professor SYRUM’s young nephew Randall who has traveled back in time to save the mobile health app industry from self-destructing.

We know Professor SYRUM has a nephew because he was featured in a Christmas Past (“Christmas 1990”) animation in which Professor Syrum gives his nephew an animal picture book (see here). Let’s accept the premise that Doctor IMS is Professor SYRUM’s nephew Randall because of the resemblance.

Doctor IMS is clearly seen in the past. How else to explain the “old-timey” look and feel of the IMS animation? The good doctor is in an “Apothecary,” which is the antiquated term for drug store. So, he must be in the past. But he’s holding a mobile phone, which is today’s technology. So, he’s traveled from the present to the past.

Both have daunting tasks. In a previous post I have discussed the likelihood of failure for Doctor IMS’s crusade. As for Doctor SYRUM, unless he launches his campaign in the U.S. as promised way back in 2012, his crusade is also doomed, IMHO (back story: “Is Pharma “Gamification” Dead in the Water?“).

Will Obama Eliminate the Advertising Business-Tax Deduction to Cover His Bailout...