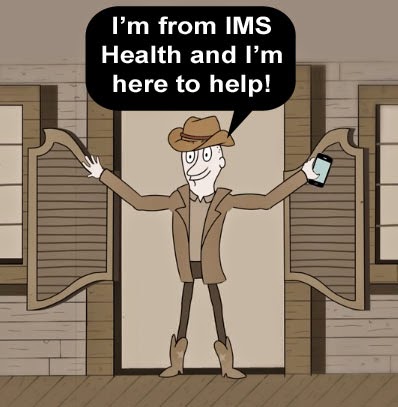 “Welcome to the wild, wild, west of mobile health apps,” says the voice over of an IMS Health animated Youtube video (embedded at the end of this post) that promotes two new mobile health app services:

AppNucleus – “the industry’s most secure app development and hosting platform that offers a flexible, cloud-based publishing platform and pre-built secure messaging, personal health record/wallet and survey tools.”
Recall (here) that the IMS Institute for Healthcare Informatics published a report that included an analysis of about 10,000 apps among the 40,000+ healthcare apps available for download from the U.S. Apple iTunes app store and an assessment of the potential value they provide throughout a patient’s journey. The assessment found that “healthcare apps available today have both limited and simple functionality… [and] do little more than provide information.”

Obviously, there is a lot of room for the improvement of mobile health apps. I’ve written about this many times as it relates to the pharmaceutical industry (see, for example, Reigning in the “Wild West” of Mobile Health Apps and A Formula for Patient-Centric mHealth Apps).

Let’s just focus on AppScript, which promises to “classify and evaluate more than 40,000 mobile healthcare apps currently available for download on iOS and Android platforms.” I have some reservations about how successful this “Software-as-a-Service”/certification program will be.

AppScript is (1) focused on physicians/healthcare organizations who wish to prescribe mobile health apps to their patients based on a trusted “formulary”, and (2) uses IMS Health’s proprietary “IMS Health App Score,” which is the same ranking system the company used to analyze a subset of the 40,000+ apps in the report mentioned above.

The idea of a trusted formulary of mobile health apps is very interesting and valuable only IF physicians really want to prescribe apps like they prescribe drugs. Obviously, to do that they have to trust the formulary to include the best, safest, most accurate, well-tested an documented, and most effective apps. But as we all know, sometimes formulary decisions are influenced by prices and reimbursement issues as well. Will all the apps on the formulary be free? If not, will insurance companies and the government reimburse the costs? Is IMS Health going to be the only arbitrator as to what apps get on formularies?

My main concern, however, is about the certification process.

IMS claims its Health App Score ranks apps based on “functionality, peer and patient reviews, certifications, and their potential to improve outcomes and lower the cost of care.” Missing from this scoring process are some criteria that I would consider very important for mobile health apps such as whether or not the information provided was accurate, algorithms were tested and worked as intended (without “bugs”), and are supported by references to reliable sources. Privacy and HIPAA and FDA compliance are also important, but I assume IMS Health will verify that.

I agree with Satish Misra, MD, who wrote in January, 2014 (here): “[The certification] process is very resource intense. Happtique took a year and a half to certify 16 apps from 10 developers. Similarly, the NHS Health Apps Library, which evaluates apps to ensure they are clinically safe, launched in March 2013 with about 70 apps; nearly a year later, its at about 100 apps. But these certified apps are a drop in the bucket compared to the nearly 50,000 apps in the iOS App Store Health/Fitness and Medical sections alone. These kinds of intensive programs are simply not scalable. And in a pay-for-certification model, it’s not necessarily the best that become certified but rather those with sufficiently deep pockets.”

I wanted to respond to your recent article entitled “Is IMS Health’s Mobile Health App Certification Program Doomed to #FAIL?” to clarify some factual errors you’ve reported. IMS Health doesn’t have a App Certification Program specifically because of the lack of scalability and the quality of such programs. Since Apps are a moving target with frequent updates (sometimes weekly) it is impossible to certify them as secure when tomorrows update might introduce a vulnerability. We do however consider endorsements of reputable organizations (i.e. Providers, Governments and Professional Societies) as a component of our score. If you have any questions regarding our programs in mobile health please feel free to reach out.

I did take the liberty in the headline of  this post to infer that IMS Health had its own certification program because that is what I thought when reading the materials. I am happy they have clarified this point, but regardless of the source of the certifications, the goal seems to be the same as a bona fide certification program: provide physicians with an independent assessment of mobile health apps based on a set of criteria. In any case, the IMS Health review process still appears to lack an assessment of some of the things I would like to see implemented in any mobile health app recommended to physicians.