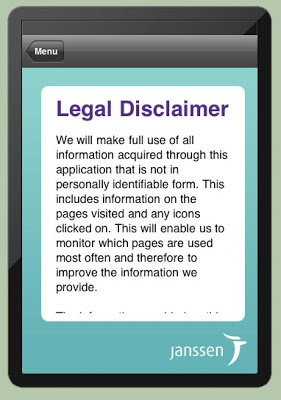 Some time ago, I pointed out that certain mobile apps developed by pharmaceutical companies for use by physicians lack adequate disclaimers. Specifically, I was concerned about the software used in these apps that perform calculations to generate data to aid in medical diagnoses. A Psoriasis/PASI app by Janssen Pharmaceutica is an example (see “FDA Promises Still More Guidance! This Time It’s Mobile. Janssen’s Psoriasis iPhone App May Need It“). I pointed out that this app does NOT include any information about the clinical validity of the PASI calculator nor does it warn the user not to depend on the accuracy of the data.

Today, I found out about AFib Educator 2.0 developed by Sanofi-Aventis (I seemed to have missed 1.0!). The app is intended to be an “interactive way for healthcare providers to illustrate atrial fibrillation and its pharmacologic management for patients and families” (see review on iMedicalApps blog). The “pharmacologic management” is not what you may think; that is, there is no mention of any AFib drug either by trade name or generic name. The app only mentions that “there are treatments available.”

Let’s look at the disclaimers for these two apps (click the image for an enlarged view): 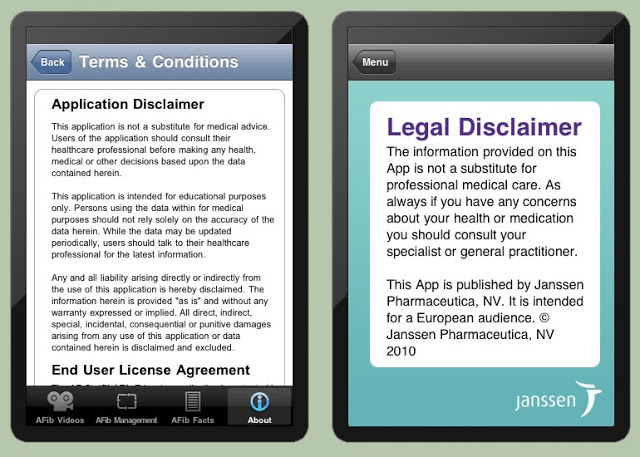 Both disclaimers mention that the app is “not a substitute for medical advice/professional medical care”. But only the AFib disclaimer mentions that “Persons using the data within for medical purposes should not rely solely on the accuracy of the data herein.” It also mentions that data might be updated periodically — meaning, I suppose, corrections or more accurate data.

Why doesn’t Janssen’s Psoriasis/PASI app, which is MUCH more data driven (it calculates a PASI score!), include a similar warning? Obviously, I think it should include that warning.

But more importantly, Janssen’s app should include information about the source of the equation it uses to calculate PASI. As I pointed out previously (op cit), there is some difference of medical opinion regarding how PASI should be calculated and which formula should be used by healthcare professionals.

Obviously, ANY healthcare professional can download and use the PASI app. You don’t have to be a dermatologist who may be more familiar with PASI calculations than is a general practitioner. In fact, you don’t have to be a physician at all! That’s fine, but the audience should be made more aware of what’s operating “behind” the app to generate the PASI scores.

Be Aware of What’s Behind the App
What’s going on “behind the app” is a hot topic these days. Recently, major news outlets have reported that there is software running in the background on virtually all smart mobile devices that record every keystroke, supposedly merely to “monitor performance” (see “Is Your Smartphone Tracking Your Keystrokes, Texts and Location?” and the YouTube Video embedded at the end of this post).

It’s interesting that part of Janssen’s NEW disclaimer HINTS that data are being collected when people use its Psoriasis/PASI app (see screen shot below).

Janssen claims that it is monitoring clicks for performance purposes. However, since it is possible to collect and record ALL keystrokes, there is the possibility that data other than icon clicks are being collected by Janssen. I’ll have to see if Trevor Eckhart — who made the video below — will take a look at exactly what data the Janssen apps records.

Pfizer’s Sales Reps Have 48 Hours to Out Deliver eSampling Program....