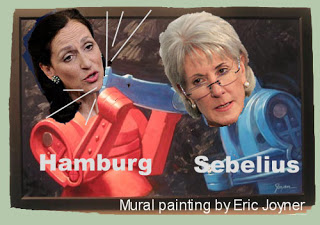 She expressed my feelings precisely!

By now you’ve all probably heard the news as reported in the NY Times (here): “For the first time ever, the Health and Human Services secretary publicly overruled the Food and Drug Administration, refusing Wednesday to allow emergency contraceptives to be sold over the counter, including to young teenagers. The decision avoided what could have been a bruising political battle over parental control and contraception during a presidential election season.”

The action was taken by U.S. Department of Health and Human Services Secretary Kathleen Sebelius in a letter addressed to FDA Commissioner Margaret Hamburg, M.D. Find that letter plus statements by both Sebelius and Hamburg here, where you can also vote on who you think is right.

Sebelius blocked the FDA from allowing the contraceptive pill, called Plan B One-Step, to be made available without a prescription (over-the-counter) to women and girls 16 and younger who now need a prescription to get Plan B. “If taken soon after unprotected sex, the pill halves the chances of a pregnancy,” according to the NY Times (op cit).