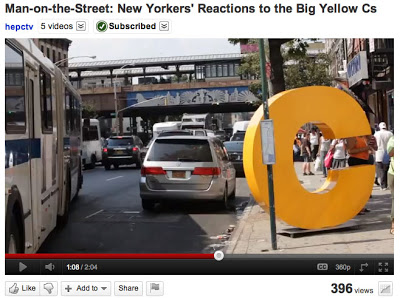 I just received this tweet from Fabio Gratton (@skypen), Co-founder & Chief Innovation Officer of Ignite Health: “Have you seen the C in NYC? (disclaimer: client) http://t.co/8CmVJOun?”

No, I didn’t “see” the C in NYC, because I haven’t been there lately. So I clicked on the link. This lead me to HepC.tv, a YouTube channel sponsored by Vertex Pharmaceuticals, which coincidentally recently received approval for INCIVEK for the treatment of Hepatitis C (aka HepC). I believe Fabio’s company was involved in either creating the video and/or the HepC.tv YouTube channel — but not the Cs themselves (Fabio deals in the purely digital realm).

HepC.tv is featuring the video “Man-on-the-Street: New Yorkers’ Reactions to the Big Yellow C.” The big Yellow Cs (see image below; looks more “orangish” than yellow to me) appeared in well known locations in NYC starting on September 13, 2011. The video shows people’s reactions and what they think the Cs are supposed to represent. One person said “vitamin C,” another said “cholesterol,” and another said “cauliflower.”

Surprisingly, no one said “Cancer!” At least no-one shown in this video.

How can that be? The plaque on every big C says “4 million Americans have this disease. 3 million don’t even know it.” Sounds like cancer to me. Maybe I’m conditioned to think that because I am a fan of the ShowTime series “The Big C,” which is about a woman living with cancer. Maybe Fabio et al did not want to promote the show, so they edited out any mention of cancer in the video, which, after all, is part of a campaign designed to “raise awareness among New Yorkers about hepatitis C and provide information on testing.”

The Big Yellow C HepC campaign is what I would categorize as “guerrilla marketing,” which according to wikipedia is “unexpected and unconventional, potentially interactive, and consumers are targeted in unexpected places.” The Big Yellow C HepC campaign is interactive because each C includes a QR code imprinted on it. You have to get up close to it to scan that code and see where it leads you. Where does it lead? Maybe the QR code should have been on the closing screen of the video so us non-New Yorkers (or ex-New Yorkers) can scan it without getting on the A-train to 125th Street! (I’m guessing, however, that the QR code leads to the FindHepC.com web site, which is shown on the last screen.)

I have many questions about this campaign similar to the questions I had about other such campaigns (see “Zyrtec Telephone Pole Ad Campaign: Guerilla or Gorilla Marketing?“). Here are some questions I posted in a comment to the video:

As you know, I am a big fan of QR codes — I have three of them on my new business card (see here)! But how many people in NYC have smartphones with a QR code reader app? Do they even know what a QR code is?

In fact, Vertex is planning many live events in the boroughs of NYC and elsewhere to increase the awareness of Hepatitis C and get people to be tested so they can sell oodles of their new treatment.

Another question I have is How did Vertex get permission to put these Cs all over NYC, which is very skittish about possible terrorist attacks? Remember that guerilla marketing campaign in Boston that went awry, causing panic among the public? I guess the Cs look too colorful and friendly to be considered dangerous.

What I am waiting for, however, are the graffiti artists to tell us what THEY think the Big C stands for. Also, we New Yorkers (and ex-New Yorkers) are known to treat anything not bolted down as “found art,” available for  taking home to your loft for kitschy display! I’m betting, however, that Vertex doesn’t leave these things hanging around 125th Street or Herald Square overnight.