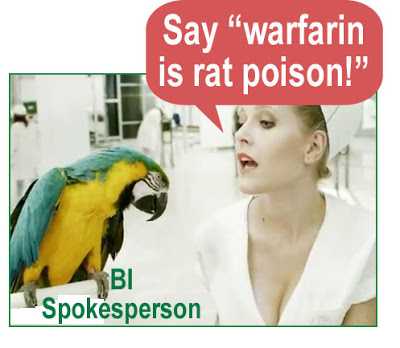 A day or two after I posted my impression of Boehringer’s (BI’s) new YouTube video that spoofs efforts to pronounce the company’s name through “word of mouth” (WOM) marketing, BI made the video private and unviewable by the general public. BUT, thanks to “crazyparrot1000,” the video has been uploaded here. I have also embedded it below:

Last night, I tweeted: “@Boehringer Sorry to see that the parrot video was made private. Was this a project approved high up in BI?” As of yet, I have not received a response to that tweet.

Why did BI decide to block viewing of this video less than 48 hours after it debuted on YouTube? In a tweet, BI said “The vid was made for a test & the period of time was short, so that is why the vid must be made private for now.”

Sorry, but I’m not buying that.

I think my followup post (BI Masters the Art of WOM through Its “Parrots,” er, Spokespersons) nudged BI into realizing it had made a mistake. In that post, I pointed out that BI was slapped by the PMCPA regarding how it may have dissed the competition via its real-life Word of Mouth “parrots” — ie, patient advocates, key opinion leaders, and the press. The following image sums it up nicely, IMHO:

Sexist?
I sincerely wish BI gave me a chance to preview this video while I was at a recent pharma eMarketing conference in Lisbon where I first learned that BI was going to launch something big on YouTube the following week. I may have criticized the video for being too sexist (the women are all very well endowed and are referred to as “lovely ladies”).

Maybe — just maybe — it could have been negative reaction from BI’s employees regarding the inappropriateness of buxom lab techs that got BI to remove the video. If so, I think BI should make that known and offer a public apology. What do you think?

In any case, perhaps the video was not green-lighted by the higher ups in BI, but I bet it was shut down by them!

Lessons Learned
P.S. A lesson learned by BI is that you often cannot take back what you did via social media and YouTube. Despite the attempt of BI to block the viewing of its video, it lives on in the version that was copied and re-uploaded by “crazyparrot1000.” BI acknowledged this in a retweet of a tweet notifying them that the video was still on YouTube: “Yes we are! Power of #sm 🙂 RT @xilede: @Boehringer you are aware that the parrots are still around on #youtube, right?”

In previous tweets, however, BI was making a big deal about how this video is ushering in its new emphasis on word of mouth marketing:

“Embarking on a new comms journey, @Boehringer has started to push the idea of WOM. Watch to learn more http://ow.ly/6zD1u #hcmktg #pharma”

“An idea needs to fly and we take this literally. Take a moment & watch our short video on #YouTube http://ow.ly/6Akmu #mtv @raycokes #pharma”

Unfortunately, it seems the idea of this video should NOT have flown!

Will BI, however, try to get YouTube/Google to remove the copy of the video uploaded by “crazyparrot1000?” It’s possible. I suggest you copy it ASAP before this happens. One thing I learned at the Lisbon conference is how to do this: Go to site KeepVid.com