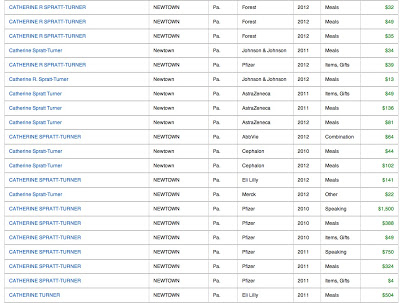 More than half of physicians surveyed by MMIS — a technology company that supplies data management services to the pharma industry — did NOT realize that the new Sunshine Law, which is part of the Affordable Care Act, requires pharmaceutical and medical device companies to report annually to the government payments to physicians as low as $10 WITHOUT physician review of the data to correct any inconsistencies or errors prior to submission. 63% were deeply concerned that a record of these payments will be available in a publicly searchable database.

Although the Sunshine database won’t be available to the public before September 30, 2014, some data are already available publicly thanks to Propublica, which launched the third update of its popular Dollars for Docs project (see “Dollars for Docs Mints a Millionaire“). ProPublica’s database, however, only includes data from 15 pharma companies that were required by law to make the data public. Although this represents more than $2 billion in payments to doctors, other medical providers and health care institutions since 2009, it’s just the tip of the iceberg. Imagine the size of the Sunshine Act database containing data from thousands of companies. We’re talking BIG DATA.

Here’s what Michaeline Daboul, CEO of MMIS, had to say about it (listen to the full Pharma Marketing Talk interview here):

(function() { var po = document.createElement(“script”); po.type = “text/javascript”; po.async = true; po.src = “http://d15mj6e6qmt1na.cloudfront.net/assets/embed.js”; var s = document.getElementsByTagName(“script”)[0]; s.parentNode.insertBefore(po, s); })();
To get an idea of the minutiae of data that will be available for analysis, take a look at the data I found in Propublica’s database for my family physician:

This database does not get into the details of these payments such as the subjects or locations of the doctor’s speaking engagements or the number of people at the meals or which drug was promoted during meals and at speaking engagements. The Sunshine Law may require such details as part of its Big Data collection (see “Finally, Sunshine Rules!” for access to the final rules determining the scope of the data to be collected).

The odds are that my physician is one of the 50% who are unaware that these data are in the public domain. If she is aware, did she get a chance to review the data before it was released?

Although the regulations specify that the Centers for Medicare and Medicaid Services (CMS) provide physicians a 45-day “review and correction” period after publication to ensure the accuracy of any disclosures, pharma companies may want to be pro-active and work directly with their physicians prior to submitting the data to CMS. To do that effectively requires BIG DATA expertise.

Despite opinions to the contrary (see here), Big Data is not “dying.” It’s just lying dormant within individual pharma companies and soon will be coalesced into one BIG CMS database in the government “cloud” accessible by every Tom, Dick, and Grassley!