In last night’s episode of Boston Legal, a TV show, Denny Crane — the senior partner at Crane Poole & Schmidt played by William Shatner — collapses due to “toxic shock” from the 30-40 medications he is taking. “Is that a lot?” asks Denny of his doctor.

Turns out that Denny suffers from acid reflux disease, “weak stream”, restless leg syndrome, hemorrhoids, weak bowel, high cholesterol, and high blood pressure. Before he can finish citing his list of medical woes, which did NOT include erectile dysfunction by the way, his doctor warns him that “these drugs can interact.” And why didn’t his other doctor(s) warn him? The answer appears below.

Denny doesn’t understand much about drug-drug interactions: “I keep them in separate bottles,” he says.

Which leads the physician to ask “Where the hell are you getting your medical advice?”

“Television,” says Denny. “They wouldn’t advertise if it wasn’t safe!”

This sets up one of the major themes of the episode in which Denny vows to take on the drug industry. “How about I sue the one that markets sixteen of the forty-two prescriptions I was taking,” says Denny to his partner Alan Shore, played by James Spader.

When Alan suggests that it wasn’t the drug company’s fault, Denny points out that the ads cite side effects as if they were “reading the telephone book. The benefits get all the bells and whistles,” says Denny. “I’m going to sue. Let’s get ’em.” 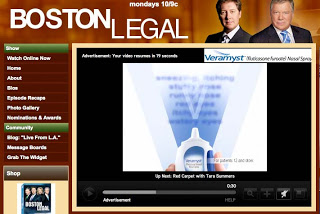 Boston Legal is one of my favorite shows. It takes on issues like the Patriot Act that the news media lacks the balls to critique. Of course, taking on the drug industry is a favorite past time of the media, at least according to many drug industry executives and spokespeople.

BTW, one of the advertisers on the Boston Legal show’s website is Veramyst, a prescription drug (see screen shot on left). It is one of those ads that presents side effects as if “reading the telephone book.”

How can a show survive that is critical of the marketing practices of its advertisers? Simple. It doesn’t. I’ve heard from the show’s bulletin board that the it will be canceled after this year.

Although this storyline looked promising, I just could not keep awake to watch the episode live. Luckily, however, I was able this morning to view the episode on abc.com and report here on the outcome.

In pre-trial talks with the suits from the pharmaceutical company being sued, Denny and Alan hear from the other side: “Tell me why we shouldn’t counter-sue for…,” says one of the drug company’s lawyers (of which there are several present). He cited “frivolous law suit and extortion” as two reasons. For a comeback, Alan says “My impression of the pharmaceutical industry is it’s always so nice.” Hah! Good one!

“What is it exactly you are claiming we did?”

“You brainwashed my client,” said Alan. “The massive marketing strategy employed by your trade association caused him to gulp down forty-two different drugs on a daily basis.”

Anyway, Alan continues. “You market to senior citizens because your research shows they are easy targets, susceptible to deceptive advertising.”

“What happened to him,” one pharma suit said, “was his own stupidity.” That’s always a crowd-pleaser comeback. “Do you actually think you can intimidate us? Do you have the slightest sense of how powerful we are?” asks the suit.

“Last week I took on the tobacco industry,” said Alan. “Imagine my surprise to discover you two are so much alike.”

“The only difference I can see is that the FDA is hostile to cigarettes. You, they roll over for,” says Alan. Wow! The zinger!

But then Alan had a Dr. Evil moment. “I’m the one that just nicked the tobacco industry for $200 million,” boasted Alan. That’s a big number, but not much more than 6 month’s DTC marketing budget for a blockbuster drug. Lunesta, for example, spent nearly that much on DTC in the first half of 2007 (see “Lunesta’s Ad Spending Spree and Other DTC Oddities“).

Blame the Internet
At the pre-trial hearing I learned how it was that Denny could have been prescribed so many medicines that interacted with each other: he purchased them off the Internet without consulting a physician! Now how likely is that? I mean to say, how likely is a multi-millionaire lawyer to go on the Internet to purchase medicines and without first consulting a doctor? Surely, Denny has a great health plan with a low deductible for Rx drugs!

Anyway, I can suspend my disbelief just as well as the next guy, and believe that the unbridled Internet is the drug industry’s defense.

Alan hits all the anti-industry buttons. He brings up an “industrywide pattern”: “They’ve been caught buying clinical trials, bribing doctors, distorting science…many of these so-called peer-review articles we see in medical journals are actually ghost-written by the drug companies themselves and doctors take payoffs and let their names appear as the authors.”

“The fact is, the US pharmaceutical industry spends almost twice as much on promotion as it does on research and development. American television viewers spend as much as 16 hours of prescription drug advertising each year. They invent diseases…be it restless leg syndrome, dry eye, unspecified sleep disorders…” Again, no mention of erectile dysfunction, my favorite drug industry invented disease.

Where Does the Show Get the Data It Cites?
I’d like to know where the show gets the data it cites, although I have a pretty good idea. For example, the “factoid” that the drug industry spends 2X as much on marketing as it does on R&D probably comes from a PLoS Medicine article that I critiqued a long time ago (see “Promotion vs. R&Deja vu all over again!“). It would be interesting if the show’s website included all works used for the numbers it cites, but I guess that would be too much to expect.

Anyway, back to the show.

When the judge allows the case to go forward, the pharma lawyer blurts out “What? Are you crazy?” and Alan retorts “Perhaps you have a pill she could take.” “Do I look like an idiot,” asks the judge. “They have a pill for that too,” says Alan. Yeah, I wish! Good fun. Watch the episode here.