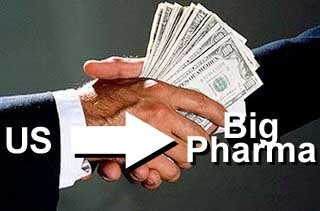 While everyone was focused on the $700 billion proposal to bailout Wall Street, hardly anyone noticed the $25-$50 billion bailout of the automobile industry that is currently in the works (see “House passes auto industry bailout“).

Many other industries, including the pharmaceutical industry, would probably love to join the Bailout Billions Recipient Club.

For some time now, I’ve been running a poll of readers asking them if the pharmaceutical industry is in a recession. Almost 80% of the nearly 800 respondents have said that it is in a recession (you can take the poll here – “Bailout Bonanza, Recession Redux” – and see the current results).

According to an article published in the “Yer Biotech Blues” column on MidwestBusiness .com (see “Will the Same Chaos Happen to the Pharma Industry?“), the pharma industry has about $20 billion in assets (leading drugs) in jeopardy (loss of patent) in 2008.

Little noticed in all the hubbub over Wall Street was the fact that the $700 bailout was expanded to include the possibility of helping other industries: “Other businesses, such as student and credit-card lenders, also could eventually access the program. To permit that, House and Senate versions of the bill written overnight — with lobbyist input — now include language broadening the types of assets eligible for sale under the plan, from ‘mortgage-related’ to ‘troubled assets.’ The bill now goes by the acronym TARP, for Troubled Asset Relief Program.” [See WSJ: “Auto-Finance Firms Seek a Hand“]

So, it is not inconceivable that the drug industry will benefit at taxpayers’ expense in addition to the mortgage and auto industries!

FDA Backs Down on Coupon Study