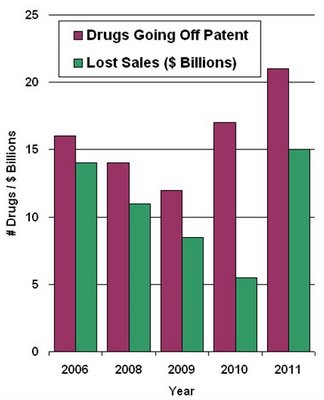 According to a Forbes article, “By 2011, a quarter of current drug sales in the U.S. will be eaten away by less expensive generic pills as medicines lose patent protection. Between 2007 and 2011, more than 80 medicines are expected to face this fate.” (See “Nagging Doubts For Big Pharma“.)

The data are plotted on the left.

This year was bad, but 2011 looks even worse! You might even say it’s a “Tipping Point.”

Faced with this looming drought, what are the options for this “innovative” industry?

Don’t expect much relief from in-house innovation. The current pipeline of new drugs from Big Pharma has slowed to a trickle. “It’s not clear that new drugs can make up for the ones that will be lost,” says Forbes.

Other options being pursued, include the following.

This option is a double-edged sword: “Down the road, this Medicare boost could be a double-edged sword. Once they have enrolled all those new patients, the HMOs and benefit managers will start exerting more price pressure on the drug companies, forcing them to sell more medicines on the cheap.”

The naming of Jeffrey Kindler — former corporate counsel — as CEO of the biggest pharmaceutical company in the world telegraphs that the industry will pursue legal remedies to shore up and extend the life cycles of its current drugs (see “Kindler Fox in Pfizer Henhouse/Bunker“).

This is what the Forbes had to say about that: “Worse, buying new experimental medicines from tiny startups is getting increasingly expensive. For instance, Genentech yesterday offered to pay up to $605 million for rights to co-discover and develop new cancer drugs with a privately held biotech, Inotek Pharmaceuticals.”

Traditional biotech companies like Genentech, which are now buying innovation from smaller companies, are beginning to look and act more and more like “Big Pharma” companies. We soon will be entering an era of biotech “me-too” drugs. “Even biotech drugs, which are synthetic versions of natural proteins, may face copycats,” says Forbes.

Facing competition from copycats, it’s no wonder that biotech companies are starting to market their drugs directly to consumers like Big Pharma. For more on that, see “Biotech DTC: Business Not As Usual.”